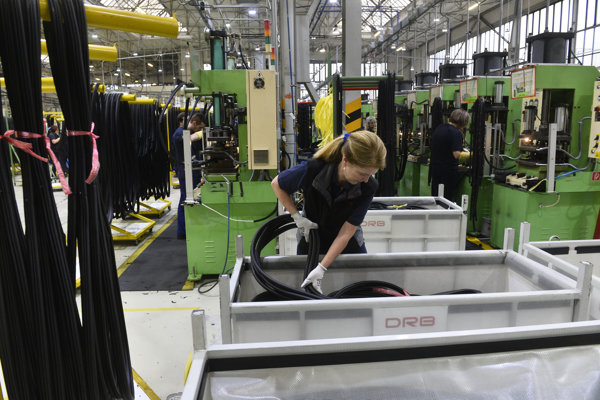 Based on the Economy Ministry’s proposals, the cabinet discussed and approved investment aid amounting to €10.06 million on January 24, meant to support the creation of 1,147 new jobs at five companies that will implement their investment intentions amounting to €69.49 million.

Pankl Automotive Slovakia in Topoľčany is requesting the provision of investment aid worth €1.55 million in the form of income tax relief to set up a high-performance centre for the production of gearbox and engine covers in Topoľčany (in the Nitra Region). The implementation of the investment project with a nominal investment of €12.07 million is spread over the 2017-2019 period. In direct connection with the investment, the beneficiary has promised to create 120 new jobs by the end of 2021, the TASR newswire wrote on the same day.

Dongil Rubber Belt Slovakia is asking for investment aid of €1.95 million in income tax relief for constructing a new production hall and expanding its industrial plant, which manufactures rubber seals in Považská Bystrica (in the Žilina Region). The realisation of this intention with justified investment costs amounting to €19.17 million is spread between 2016 and 2019. In line with the plan, the firm will create 150 new jobs by the end of 2020.

What other companies ask for

The third company, Rochling Automotive Slovakia from Bratislava, is requesting investment aid as income tax allowance worth €1.05 million to build a new plant for producing plastic automotive components in the village of Kocovce (Nové Mesto nad Váhom district, in the Trenčín Region). Directly related to the €16.87 million investment project, the beneficiary will create 77 new jobs by the end of 2020.

ZF Slovakia has asked for investment aid in the form of income tax relief of €4.25 million, to extend its existing production of conventional shock absorbers and expand the production of new adaptive shock absorbers at the Levice (Nitra Region) production site, according to TASR. Directly connected to the €17 million investment project, the beneficiary will create 750 new jobs by the end of 2022.

The final firm, Optotune Slovakia, is requesting investment aid of €1.26 million – a contribution to long-term tangible and intangible assets, income tax relief, and a contribution to the creation of new jobs, to set up an innovative technology centre in Trnava. The implementation of the investment plan with a nominal value of €0.52 million is spread over the 2017-2019 period. Eligible salary costs amount to €3.86 million. In direct connection with the investment, the applicant will create 50 new jobs by the end of 2021.