Four Prešov students shine in science around the world with outstanding projects, from ecological issues to biomaterials. 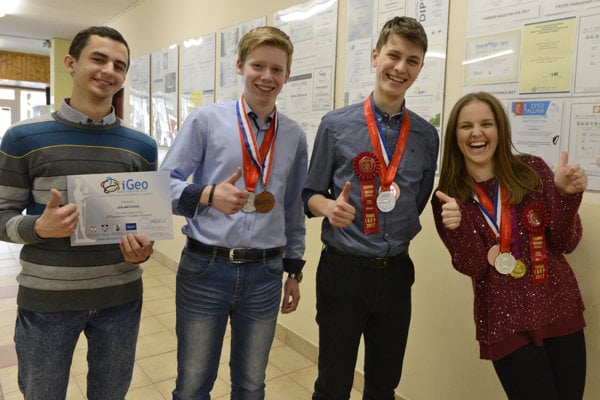 The vestibule of Catholic school Saint Mikuláš in Prešov is decorated by students’ awards from international Olympiads and prestigious scientific competitions from all around the world.

Students of Miriam Feretová Sr., teacher of biology and geography at the school, have shown that Slovak students can be innovative on an international scale in the sciences.

Working together for health

Two such students are Miriam Feretová Jr. and Samuel Smoter, who each have an asteroid named after them.

Their first success came in 2016 when each was awarded a bronze medal for separate projects at I-SWEEEP (International Sustainable World Energy, Engineering & Environment Project) in Houston, USA. Miriam studied Rhytisma acerinum, a tree fungus, while Samuel researched the elimination of heavy metals with help of zeolites, a type of mineral.

After this, they started to work together.

“We tested using essential oils as tick prevention and found out that some of them are 14 times more effective than synthetic repellents. At the same time, ours are not harmful towards health and the environment and the price is a third of commercial ones,” said Miriam Feretová Jr., as quoted by the TASR newswire.. 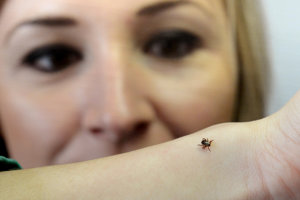 They won silver medals at the biggest scientific competition for secondary school students, the Intel International Science and Engineering Fair (ISEF) held in Los Angeles. Intel ISEF was attended by 1,778 students from 75 countries, competing in 17 different groups. The Prešov students were the only Europeans nominated to compete in the Animal Science category.

They also gained a special prize from the China Association for Science and Technology (CAST) in the category Special Awards, with an invitation to the international competition CASTIC in China to defend their silver medal, which they did. One of the prizes included naming the two asteroids after the two students.

Now, the pair of talented high schoolers are testing new biomaterials made from the cells from fat fibre that could be used as a substitute for the metal used in joint replacements. Denisa Harvanová from Medicine Faculty in Košice is helping them with the project. The pair of high schoolers will attend the competitions Expo science in Luxembourg and Intel ISEF again in Pittsburgh, Pennsylvania with their new project.

After high school, Feretová and Smoter would like to study medicine.

Peter Škripko and Ján Maťufka, students from the same school, completed a project concerning ecological sunscreen that can protect human skin against UV radiance. The sunscreen would be more efficient and commercially cheaper than ordinary cosmetics.

“We cooperated on this project with the Department of Biophysics of the University of P.J. Šafárik in Košice where we got technical facilities and consultation as well. We presented the project at the Festival of Science and Technology in Bratislava and in April we are going to present it at the Vernadsky National Contest in Moscow,” said Škripko, as quoted by TASR.

Before this project, he devoted his time to desalination of soil via plants and silicon, an ecological and cheap method, according to Škripko. He took third place at I-SWEEEP with this project and in China he gained silver medals as his classmates did. In March, he is also going to Luxembourg and after high school, he would like to study economics.

For Maťufka, participation in science projects is a new experience, although he had previously attended competitions in Geography (in Serbia), Astronomy and Math. In the future, he would like to stay in the technical field, mostly in mathematics or IT. 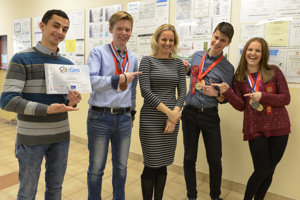 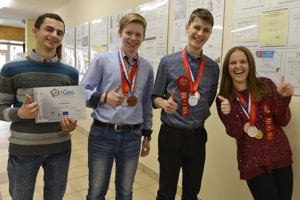 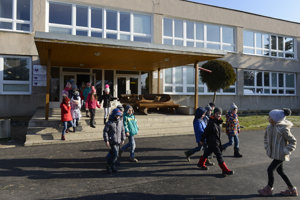 Students of of Catholic school Saint Mikuláš in Prešov (3 photos)