As Heidi Klum is running towards a plane, you hear: Hamburg – rain. When she gets off in the United States, you hear: Los Angeles – sun. The cult TV ad for the Drei Wetter Taft hairspray made in the late 80 's, has had such success, it has seen several remakes since then. It has made Henkel's Schwarzkopf brand a household name. However, the international company originating in Germany does not focus only on its well-known hair cosmetics, and in Slovakia it is also a leading provider of cleaning supplies, laundry products, and adhesives. More than 10 years ago, the company also started to build its professional Shared services centre (SSC) in Bratislava. Over time, it has become the largest Henkel SSC in the world. Today, more than 1,600 people from 40 countries work at Henkel Slovensko, many of whom enjoy doing things differently. 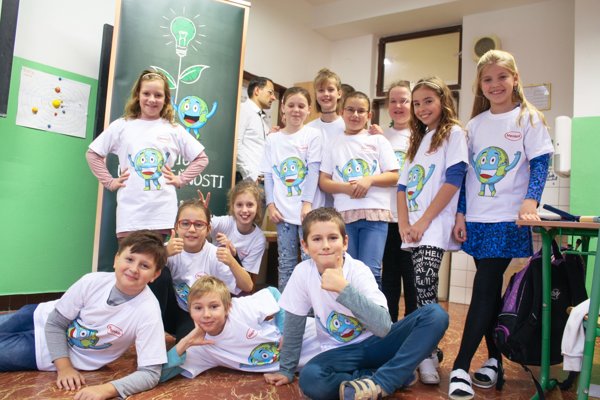 Students from the class 4.A at Nobelovo nám. in Bratislava have gained valuable knowledge about sustainability issues
Font size:A-|A+0

However, there are things happening at Henkel Slovensko you might not expect at a successful, multinational company. Filip has been fascinated by robots since childhood, so he began inventing them for Henkel. Kristína wanted to help as a volunteer, so she cooked up a project that she was able to get off the ground during her working hours. And Marek is one of Henkel’s ambassadors of sustainability who teaches children about environmental protection. Read on to learn more about their inspiring stories.

Kristína Pócsová: "You are not alone." 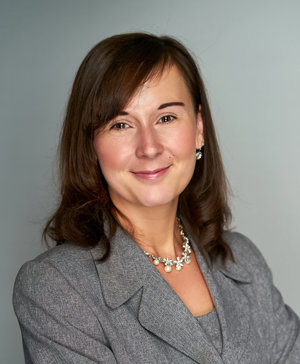 Kristína, a Corporate Audit Support and a superhero

When we asked Kristína how she started the “You are not alone” project, she said: "I sat down and made it happen." In other words, she is a proof that helping is possible when one wants to find a way. Kristína, whose job at Henkel consists of corporate audit support, came up with the project three years ago. Thanks to her, dozens of employees regularly visit a children's ward in a hospital and three homes for the elderly. They spend time with young patients and with the elderly and prepare special projects and activities for them.

"In October – the month of respect for elders – we work on a so-called Shoe box activity. The employees grant the wishes of the elderly, who may ask for anything that can fit into a shoe box. It is a very popular project, and this year we were able to fulfil the wishes of more than 300 senior citizens," says Kristína. "It always surprises me how much they appreciate even mundane, little things. Coffee, chocolate, vitamins, lotions, or shaving cream, can make a big difference for them."

The number of those interested in volunteering exceeds the number of available places. Each month, volunteers go to senior homes and hospitals as if they were business trips – at least that is how Henkel treats the visits, allowing employee visits to take place during paid business hours. Volunteers always leave with small gifts for the children and the elderly. Moreover, “You are not alone” is not Henkel's only volunteer program. Its employees collectively donate blood, collect clothing and grant Christmas wishes for children living in children's homes. 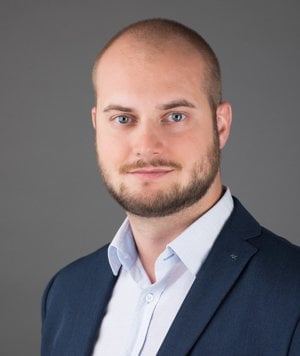 Filip, a Team Manager CoE Robotics and a robot BFF

"Since founding our team about two years ago, I consider it my greatest career accomplishment," says Filip Imre, who develops robots at Henkel. "We started off as two nerds and now there is a team of 14 professionals working on two continents. The field of process robotics is a relatively new industry. We are the first and only team focusing on it in our company and we are growing at an astonishing rate."

Filip and his colleagues do not build the type of robots most of us probably imagine. His creations are not humanoid nor do they resemble robots seen at Japanese technology fairs. Filip says that if their robots had physical forms, they would most likely resemble an assembly line in a factory, not robots from Hollywood films. They are computer programs that make people's jobs easier. Filip is their "boss" although he does not have a degree in IT.

"The robots take upon themselves all the repetitive tasks that no one enjoys and that kill motivation. Our robots are programmed tools which do such tasks for people. The bots help our colleagues out, allowing them to devote a lot more time to interesting activities with added value, which can develop their abilities," explains Filip who, together with his colleagues, often works on a number of robots at the same time. They do not cover only the needs of Henkel Slovensko, but of the Shared service centres in Mexico, the Philippines, Egypt and China.

Marek Sihelský: “This project combines what I like with what is useful.” 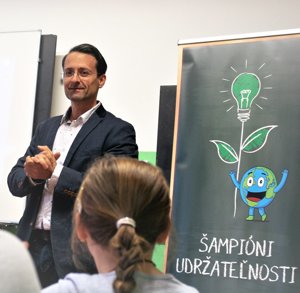 It’s been some time since Marek’s last school bell rung. However, he decided to come back to his old school last year. He is one of Henkel’s Sustainability Ambassadors volunteers, who meets with pupils and teaches them how to be environmentally conscious and how to become role models for their family and friends. Last year, the ambassadors wanted to train 3,000 children, and they managed to exceed their goal and teach more than 6,200 pupils around Slovakia.

“This project combines what I like with what I find useful. I enjoy direct contact with children’s creativity, playfulness, interest, and delight,” says Marek. He has trained more than 700 third and fourth graders at six primary schools. During the model lessons at the schools, Marek and his colleagues explain how to reduce one’s waste, recycle, and use things repeatedly. Children learn a lot while having a lot of fun. They watch an educative animated film, colour and compete with each other.

Marek himself approves of the values they try to teach the children. “If we do not change anything, we will need five planets by 2050. So even though this program may start small, by educating future conscious citizens its impact grows every day. That is why the program is very meaningful to me and why I am proud to be a part of a company whose values, strategy, and motivation I admire.”

Henkel operates globally with a well-balanced and diversified portfolio. The company holds leading positions with its three business units in both industrial and consumer businesses thanks to strong brands, innovations and technologies. Henkel Adhesive Technologies is the global leader in the adhesives market across all industry segments worldwide. In its Laundry & Home Care and Beauty Care businesses, Henkel holds leading positions in many markets and categories around the world. Founded in 1876, Henkel looks back on more than 140 years of success. In 2016, Henkel reported sales of 18.7 billion euros and an adjusted operating profit of 3.2 billion euros. Combined sales of the respective top brands of the three business units – Loctite, Schwarzkopf and Persil – amounted to more than 6 billion euros. Henkel employs more than 50,000 people globally – a passionate and highly diverse team united by a strong company culture, a common purpose to create sustainable value, and shared values. For more information, please visit www.henkel.com.

Henkel has been operating in Slovakia in all its three strategic areas since 1991. Henkel Slovensko sells more than 50 brands and, as of today, employs more than 1,600 people.