He slept in toilets and took snacks from policemen: how a homeless man turned his life upside-down

The man spent ten years living at the main railway station in Bratislava. Now he has a home and is a top seller of the homeless magazine Nota Bene. 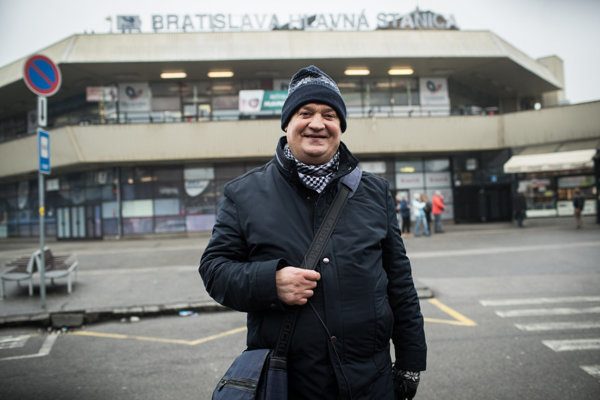 Rudy used to know the main railway station in Bratislava like the back of his hand. Today, he is one of the most successful sellers of the Nota Bene magazine. (SME - Jozef Jakubčo)

He has not been back there for three years. When he roams Bratislava’s main station now, he smilingly points out all the sites where he used to sleep: in the cardboard boxes behind the shrubs, in niches, in the café, in the waiting room, in the tiny toilet cubicle, sitting upright.

Currently, all the benches in front of the building are divided so that you cannot lie on them. “It’s all a matter of the past for me. Now I am happy and can laugh,” Rudolf Ištok, known as Rudy, explains. He can think back on these undignified moments with detachment.

Rudy spent ten years of his life here. “I was a sort of clown. I was always able to procure some money,” he recollects. He even had a reputation as a bit of a fraudster, selling old copies of the Note Bene magazine but Rudy Ištok has left his former kingdom and his position on the street is completely different today.

In the old days he used to help the kiosk vendors carry goods, reported incidents to the police and even entertained the passengers while they were waiting for the train. “Even though I was the way I was, I was always polite, decent, mindful, and in return, people helped me,” Rudy explains, outlining his strategy for survival on the street.

Police officers gave him their snacks, all the taxi drivers knew him and one of them even saved his life when Rudy got so drunk he had to be hospitalised.

The local diner, whose manager Julo gave him the most support, still has its regulars and a sign over the door proclaiming the unlikely sentiment ‘Relax and Dream’. It opens at 05:00 and Rudy used to get up and clean the place. He won over the manager to the point that he gave him the keys to the staff toilet near the restaurant and said Rudy could sleep there overnight.

Even though Rudy has not been here for three years, he recognises many acquaintances, even the police officer who showed compassion when he saw Rudy at the station, falling sleep. “That homeless man was so decent -good old days -people like him are a rarity today,” the officer notes.

Rudy also remembers the bad times, though When his group was kicked out of the station, they used to travel on the trams. They tried to keep warm in department stores where they also washed and shaved.

“We always managed to get at least a sandwich to eat. Several times, we popped in to Vagus (the daily centre for homeless people, ed. note) where you could eat for a few cents, and sometimes, we visited the church near Tesco in the city centre where they distributed soup and a main course at noon.”

In his view though, even the hard experiences were like a walk in a rose garden. He has his nature to thank for this: he seems to be always merry, talking now and then to anyone and everyone passing by.

Many old acquaintances do not recognise him until he introduces himself. “I am revived, changed. I used to look different,” Rudy explains proudly. “Back then, I lived without a care, with a circle of friends and alcohol. But when I got sick, I had to tell myself, stop! enough is enough…”