While Slovakia later adopted the euro, following the macroeconomic development of Slovakia and the Czech Republic has not differed fundamentally

Twenty five years ago on February 8, 1993, the Czech-Slovak currency, the Českoskovenská koruna (Kčs) or Czechoslovak Crown (CZK), divided into two sovereign currencies, the Slovak and Czech crown. This process was fast and presented no significant problems.

While the monetary development in both countries took different directions, their economies remained similar in terms of structure. Neither did the 2009 adoption of the European single currency in Slovakia change this. This stems from an analysis of the Centre for Economic and Market Analyses and the company TopForex. 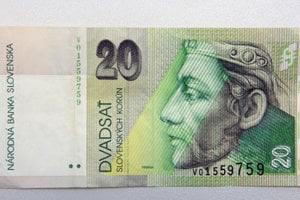 The euro helped Slovakia increase standards of living to the EU average immediately after its adoption (2009/2010). On the other hand it did not enable give the economy such a growth impulse as was the weakening of the Czech crown through interventions by the Czech central bank between 2013 and 2017.

“Having a joint or sovereign currency always has advantages and disadvantages in the EU that alternate,” said Ivor Lehoťan, executive director of TopForex.

In the time being the current biggest difference can be illustrated by the situation on the crypto currency market.

“While Slovakia will cope with crypto currencies through a block of countries using the euro, the sovereign Czech national bank must solve the matter on its own,” said Lehoťan. Trading with these currencies is not subject to supervision by the Czech central bank.