The flash estimate of the GDP by the Slovak Statistics Office shows it increased mildly compared y-o-y, as well as against the previous quarter. Economic growth was slightly higher than foreseen by commercial bank analysts.

After seasonal adjustments, the GDP grew 0.9 percent in Q4 against Q3. On average, the Slovak economy grew 0.1 percentage point quicker in 2017 than in 2016, the SITA newswire wrote.

Thus it was slightly higher than foreseen by the analysts of commercial banks, who estimated that the GDP in Q4 increased 3.4 percent y-o-y- and the growth for the whole year was 3.3 percent, according to the National Bank of Slovakia (NBS), country’s central bank.

More detailed, or even corrected data, will be published by the Statistics Office on March 7.

Analyst not surprised by flash estimate

The GDP figures have not been significantly surprising, and economic growth has remained on the same level or sped-up only slightly, Ľubomír Koršňák, macroeconomic analyst of the UniCredit Bank Czech Republic and Slovakia, wrote in a memo.

It can already be estimated that the Slovak economy’s growth was drawn mainly by improving domestic demand. Retail revenues supported by the strong labour market continued to deliver dynamic growth, and supported the relatively stable reviving of household consumption. It seems that investments continued growing, as well as bank loans for entrepreneurs.

Exports were also revived in Q4 – which was helped especially by the re-start of the automotive industry. However, December’s figures are not so encouraging anymore and they have partially reduced expectations concerning GDP growth in the last quarter of 2017. The preparation of new production lines for new production has probably contributed to the repeated decline in this key sector of the Slovak industry, which seemingly continued in January.

It also resulted in lower imports by the end of the year. The combination of stronger exports and weaker imports (industrial supplies) thus could help return the contribution of net export to GDP growth back to positive numbers, Koršňák opines.

Labour market has its ups and downs

Economic growth is further reflected positively on the labour market, where the employment rate in ESA2010 methodology increased 0.5 percent at the end of 2017, according to the Statistics Office.

The growth in the employment rate has slowed down a bit compared to previous quarters, despite the slight acceleration of economic growth. The reason may be hiring the labour force in advance, as well as exhausting the stock of labour in the west of the country, resulting in soaring vacancies by the end of the year.

A lack of labour represents a threat in the upcoming years for the Slovak economy – when it may become its limiting element. 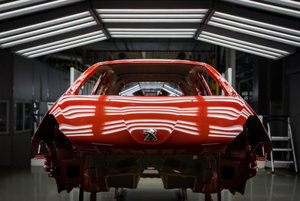 The outlook hints a re-start and revival in the automotive industry (stagnating in 2017), including the production launch of a fourth carmaker, according to Koršňák.

The high rate of using capacities should still – at least in 2018 – maintain the growth trajectory of investments in Europe. On the other hand, European economies will approach the top of the current economic cycle, retail revenue figures from Q4 2017 suggest. Western European countries in particular seem to have volatile retail revenues, coming close to a slowdown of household consumption.

In central and eastern Europe, a strong labour market could still strongly support household consumption this year, but as for 2019, we will probably witness a slowdown in growth in this region, Koršňák opines.

A slowdown in the cyclical growth of European economies is especially expected in the second half of 2018 and in the next year. This will partially dampen the offer shock in Slovakia, stemming from the car industry. The macroeconomist estimates the growth of the Slovak economy to speed up in 2018 from 3.4 percent to 3.9 percent, and in 2019 to 4.1 percent.