Apart from giving four performances in the theatre where his Slovak career started 50 years ago, internationally famous mime artist Milan Sládek will also have a show with the public-service RTVS broadcaster. 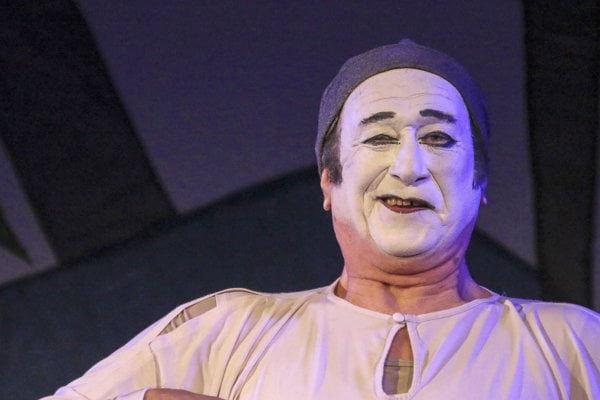 To celebrate the 80 th birthday of Milan Sládek, the renowned mime artist will perform on the stage where he mimed 55 years ago. The Malá Scéna theatre in downtown Bratislava offers four performances of this Slovak expat, which will combine his cult play Dar (Gift), from 1969 as a reaction to the Soviet invasion, and his most recent piece, Andy & Basquiat.

“In the beginning – which was quite difficult – I was told that my art is not typical for Slovakia,” Sládek recalled at a meeting with the media on February 22. “But I answered that as I am Slovak and I am doing the art of mime, it has become part of the national culture.”

Describing his long and winding road to this genre, the famous mime artist said he started at the school of applied arts, learning to be a carver. From there, his career took a turn to puppetry, acting and later the art of mime, which he started to study and also perform in Prague, the capital of then-Czechoslovakia. The first performance took place in March 1960. 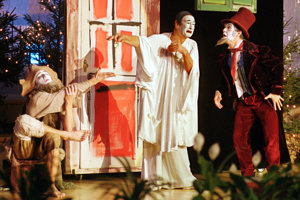 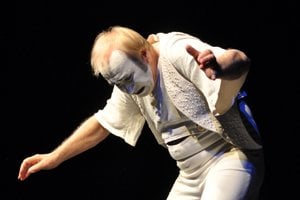 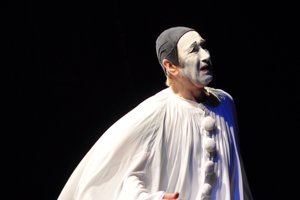 When the theatre he and his colleagues performed at lost interest, he came to Bratislava, to a new local stage called Malá Scéna (Small Stage). After his very first performance Evening of Mime in 1958 as part of the student troupe of the local Comenius University, Sládek got to perform first in the Slovak National Theatre (1961-1962) and then at Malá Scéna (1962-1968).

Later, he became a director of Theatre Studio Bratislava but after August 21, 1968, he left Czechoslovakia which was occupied by Russian-led armies. He first emigrated to Sweden and then to Cologne, Germany, where he opened his own Kafka Theatre (1974), then the only pantomimic stage in western Europe.

After the fall of communism and the dissolution of Czechoslovakia, he brought a historical building of the Arena Theatre back to life, making it the only Slovak stage offering the art of mime. He was in Slovakia from 1992 to 2002, when he returned to work in Germany.

On the art of mime

His work was not subject to communist-regime censorship because “how can you censor mime”? Nor did he, with his ensemble, have to play a certain portion of “Soviet-made” plays, as there were none, the Slovak mime actor added. And thanks to the fact that he was able not only to do the staging and puppets (thanks to his education and later training), but also costume designs and lighting, he was independent and truly free to create the kind of theatre he envisioned. Nevertheless, Sládek left Czechoslovakia in protest against the occupation of August 1968.

“The art of mime is, in a wider sense, studying reality around us, processing it within and finding a way to express it,” he noted. “It is fundamental to all of civilisation: medical science, philosophy, religions – everything was born out of mime. Even before the first images in the prehistoric caves appeared, people had started mimicking other people and animals; it was not yet art in the strict sense, but rather a way to explore the surrounding world.”

The man who arrived to Germany and founded a theatre there claims he was a pioneer in making the art of mime a full-length theatre piece, of which he has made many.

Bratislava celebrations of the jubilee

In the Bratislava performances on February 28 and March 1 (at 10:00) and March 2 and 3 (at 19:00), he will give two one-act plays, lasting two hours in total. The first one, Gift, is a political grotesque parodying the coexistence of Czechoslovakia and the communist Soviet Union on the story of Kefka, Sládek’s alter ego who gets to breed a small, strange bird without knowing what can grow out of it.

The second piece, Andy & Basquiat, on the other hand, is a recent work that pays tribute to one of Sládek’s fascinations, US artist with Slovak roots Andy Warhol, as well as Afro-American graffiti artist Jean-Michel Basquiat. The one-act play reflects on the clash of concepts of two great, though completely different, artists.

A TV programme of the public-service broadcaster, RTVS, televised on February 24 and called A Gala Evening (Galavečer), then lets Sládek look back at his life, his career, his moving to and from Slovakia, his artistic development but also his future plans. He himself will not perform but his colleagues and partners from past and current performances will.

Recap and plans for future

“I was told I don’t have to defend or convince people that the art of mime is good with my words – but I tend to do so,” Sládek admitted at the press meeting. “Maybe its because I cannot speak on-stage so I compensate for it off-stage.” It is interesting to listen to his musings and explanations, though, for example on the inner skills and practices of mime artists, but it is equally fascinating to watch him perform onstage. This can be seen in the fact that in the 80 years of his life (he turns 80 on February 23, 2018) and 60 years of performing mime, he has toured 55 countries worldwide with more than 46 of his own performances, while receiving several awards. Apart from performing, Sládek has also organised festivals of this genre – one in Germany and one in Slovakia that ran for several years each. An art of mime festival complete with a workshop is slated for February 2019.