A journalist is murdered: Where do we go from here?

Slovakia feels like it has arrived to a breaking point brought about by the unthinkable that has happened. 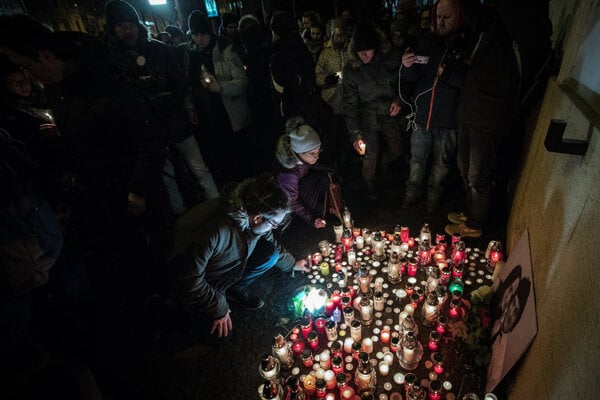 People came out to the SNP Square in Bratislava in the freezing evening of February 26 to light candles in the memory of investigative reporter Ján Kuciak and his partner Martina Kušnírová, who were murdered. (Source: Sme)
Font size:A-|A+13

Be calm when the unthinkable arrives, historian Timothy Snyder wrote as the fifth of his 20 lessons, later expanded to become his best-selling book On Tyranny.

He was writing about the threat from would-be autocrats. No such direct threat exists in Slovakia right now. But his advice holds.

In Slovakia, the unthinkable happened on Monday, February 26, 2018, when news broke that an investigative journalist had been found murdered in his home, gunned down together with his wife-to-be.

Reactions by representatives of the government, the police and the prosecution service betrayed genuine shock over the event.

“This is not Malta, this is not Russia where they shoot journalists, we are in Slovakia and as long as I am here, this cannot happen here,” General Prosecutor Jaromír Čižnár said during a press briefing that he held in order to address journalists about the murder of one of their colleagues.

It was clear this is something Slovakia’s leaders never wanted, and that they did not see anything like this coming; so much so that even normally critical commentators and noted Slovak journalists mentioned and discussed this fact in the aftermath of the tragedy.

Investigative journalists and heads of major newsrooms in the country also admit that they never counted on the possibility of a journalist being murdered in Slovakia, and had never considered such an eventuality when making their editorial decisions.

But it did happen in Slovakia, and it happened not only to a promising 27-year-old investigative reporter, but also to his equally young fiancée whose only “fault” was that she stood by her future husband.

Their deaths brought the community of Slovak journalists closer together, to experience a feeling of togetherness that will hopefully last. Despite the fear that even the most experienced reporters are not shy to admit to, major newsrooms have shown their determination by picking up the story that Kuciak was working on – and that might have been the reason he lost his life.

Two days after we learned about the murders, with people lighting candles and preparing a protest to call for consequences, it feels like the country has come to a breaking point brought about by the unthinkable. After two days it is not possible to say how events will turn out from here, but there will be consequences: democracy and freedom in this country will either grow stronger, or will decline.

In the face of an unprecedented act of violence, the instinct of the writer is to avoid clichés, to make sure the act is properly described, stripped down to its core and accorded its due importance, in order for readers to clearly understand it. Still, we must believe that Ján Kuciak and Martina Kušnírová have not died in vain.