Iranian living in Bratislava founded a group of foreigners performing stand-up comedy in English, for locals and foreigners living in the city. 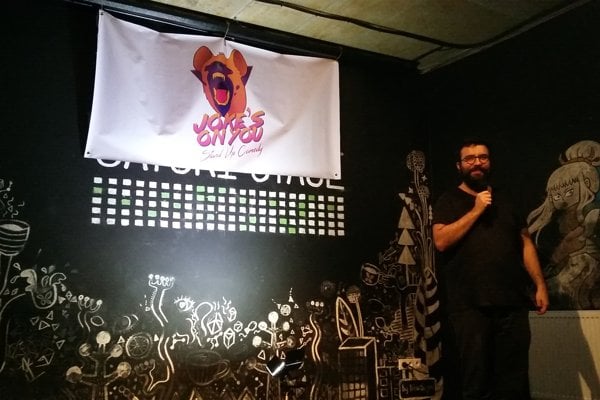 People are entering the room, sitting on prepared chairs. Some are with friends, some alone with a glass of wine or beer but everyone fixes one’s eyes on the stage where a young woman stands.

“I’ve been living in Slovakia for seven years now. I don’t necessarily like the title of immigrant anymore. I’m like a coconut. On the outside, I look brown and hairy but inside I am so white. I should have been called Zuzana,” started Nasi, an Iranian stand-up comedian.

She moved to Slovakia seven years ago with her family. Nasi and her brother Siavash started to perform in Slovak stand-up shows. Later, Siavash came with the idea of stand-up comedy in English.

Siavash Alaghmandan Motlagh, Sia for short, started to organize his own English shows two years ago.

“I called out people on my Facebook profile. I made a post – and I never make posts – that I am looking for comedians,” Sia describes the beginning of Joke’s on You for The Slovak Spectator.

He invited everybody that commented on the post or messaged him to the meeting and they started Joke’s on You.