But the scenario linking the murders to the Italian Mafia remains the most probable version of events.

In connection with the investigation into the murders of investigative journalist Ján Kuciak and his fiancée Martina Kušnírová the police have detained two individuals set to go armed to Veľká Mača, close to Galanta (Trnava Region).

Police launched night house raids on the two individuals on February 27, who have been suspected of drug dealing for a long time. The officers seized 160 grams of methamphetamine, many weapons and a firearm. A proposal was drafted to take one of the individuals into custody, said Police Corps President Tibor Gašpar. 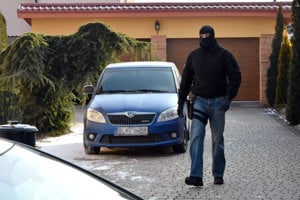 “We’re discovering and verifying information to shed light on what Friday [February 23] and the weapons were all about and why this was to take place in Veľká Mača,” said Gašpar, as quoted by the TASR newswire, adding that a number of indictments could be extended soon. “This is one of the specific examples of how the police must think and work – we can’t focus exclusively on one single scenario that dominates the headlines of all media.”

The police president also confirmed that Kuciak and Kušnírová were killed by the same weapon.

Police president does not plan to resign

The scenario linking the murders to the Italian Mafia remains the most probable version of events, according to the police president.

“We’re intensively busy with the most probable version concerning citizens of Italian nationality,” he said, as quoted by TASR, adding that no further details can be provided for the time being.

Read also:Trošková and Jasaň are leaving their posts at Government’s Office Read more

Gašpar added that he is not entertaining his own resignation at the moment.

“I’ll decide on whether I should step down and let you know in due time,” the police president claimed, as quoted by TASR.

Meanwhile, the General Prosecutor’s Office responded to the suspicions that the son of the Trebišov prosecutor’s office head is doing business with Italian businessman Antonino Vadala, whose name has appeared in the story Kuciak was working on shortly before his murder.

“The General Prosecutor’s Office will thoroughly assess and analyse the information about the alleged activities of the family member of the prosecutor in question,” Predajňová said, as quoted by TASR. “Subsequently, the General Prosecutor’s Office will explore all relevant criminal matters registered at all prosecutor’s offices in Slovakia, using the search criterion of the name and surname of the person in question. This will include the criminal matters allegedly supervised by František Bick, the prosecutor of the district prosecutor’s office in Trebišov.”

The first to reveal the alleged connection between the prosecutor’s son and Vadala was opposition MP Lucia Ďuriš Nicholsonová of Freedom and Solidarity (SaS).

“They are together in seven companies,” she said, as quoted by TASR.

She added that the head of the district prosecutor’s office is the godfather of 11 children of the businessman who has been sentenced to 11 years in prison for fraud concerning subsidies from the Agricultural Paying Agency. It was the institution the Italian clan from Calabria was focused on, Ďuriš Nicholsonová added.