US State Department calls for swift and determined investigation

The American Chamber of Commerce meanwhile warns that there can be no gambling with public trust in state institutions. 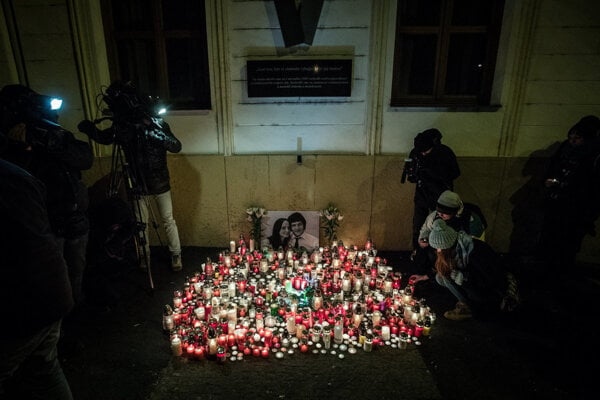 People came out to the SNP Square in Bratislava in the freezing evening of February 26 to light candles in the memory of investigative reporter Ján Kuciak and his partner Martina Kušnírová, who were murdered. (Source: Sme)
Font size:A-|A+1

The United States was shocked and saddened by the murder of Slovak investigative reporter Ján Kuciak and his partner Martina Kušnírová, said US State Department spokesperson Heather Nauert at a press briefing in Washington on February 27.

Nauert noted that there appears to be evidence that the murder was connected to Kuciak’s work as an investigative journalist.

“If that is true, we echo the prime minister’s statement that this is an unprecedented attack on freedom of the press and democracy in Slovakia,” Nauert said. “Journalists must be able to work freely and safely to safeguard open and democratic societies. The crime calls for a swift, determined investigation to bring those responsible to justice.”

Meanwhile, the American Chamber of Commerce (AmCham) in Slovakia has voiced great concern over the current situation in Slovakia and has urged law enforcement bodies to exert maximum efforts to investigate the murder of Kuciak and Kušnírová. It warned that there can be no gambling with public trust in state institutions.

“Representing 330 member companies from 27 countries around the world, who employ more than 100,000 citizens of this country, we express our deep concern at the current situation, which is unprecedented in the modern history of Slovakia,” reads a statement released by AmCham on February 28, as quoted by the TASR newswire.

The murder of an investigative journalist that was probably linked to his work represents a serious attack on the freedom of the press, according to AmCham.