Activists condemn a gathering before a court trying an extremist

Municipal officials slammed for letting supporters of an extreme-right politician tried for defamation of nation, race and belief to rally in front of court, disrupt traffic, etc. 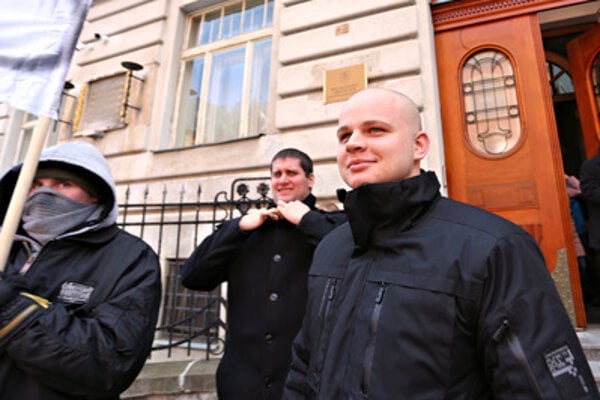 Local activists in Banská Bystrica have been enraged by what occurred on the first day of the court trial of MP Milan Mazurek (far right People's Party – Our Slovakia or ĽSNS), which started on February 26 at the Specialised Criminal Court located in this central Slovak city.

They sent an open letter to Mayor Ján Nosko on March 6, demanding an explanation why the competent bodies did not intervene against the unannounced rally in front of the court, the Pravda daily wrote. They allegedly complained that Mazurek supporters had blocked traffic, pavements and disturbed the public order.

Supporters from all over Slovakia gathered in the city, about 300 of them arriving at the court, blocking the traffic, sidewalks, public transport bus stop, and disturbing the public peace – close to an elementary school, moreover, activists complained in a letter to the mayor, the My Banská Bystrica regional newspaper wrote. The gathering was not announce in advance as required by law. The activists want an explanation as to how this could happen and why the city office did not intervene.

What happened in Banská Bystrica?

The main trial of the ĽSNS MP Milan Mazurek, who has been charged with defamation of nation, race and belief in concurrence with the crime of defamation and threatening people due to their race or the origin, continued with a hearing of the officially appointed expert whose findings comply with the lawsuit.

Mazurek, however, raised an objection against the expert in his case, stating that he is a Jew. The judge rejected the objection, the Sme daily wrote on February 27. Since some of the witnesses excused themselves and the criminal evidence before the court will continue, the trial has been adjourned.

Mazurek is being tried for some of his public statements, in a radio interview for Rádio Frontinus in October 2016. He fully denies all wrongdoing.