At his March 7 press conference, the prime minister avoided directly supporting the interior minister and police president and said he wanted to keep the coalition party Most-Híd ultimately as partner. 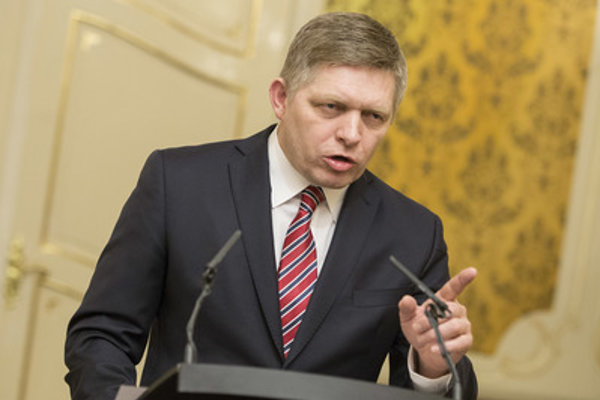 Continuing his tactic of attacking President Andrej Kiska – who reacted to the recent murder of journalist Ján Kuciak and his fiancée Martina Kušnírová by saying either the cabinet should be re-formed, or there should be early election – Prime Minister Robert Fico summoned a press conference for the morning of March 7. There, he repeated that Kiska’s efforts are aimed at initiating a coup, the Sme daily wrote. 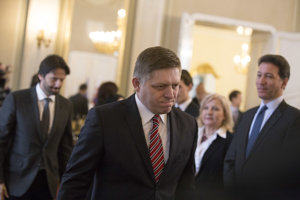 Read also:UPDATED: PM: I will not allow anyone to badmouth SlovakiaRead more

President Andrej Kiska is receiving representatives of the opposition and civil activists on March 7. Prime Minister Fico comments on that are the following, as cited by Sme: “Today, a scenario begins in the presidential palace whose aim is to change the situation in the state, and to negate the results of democratic elections.”

Fico answered - while not answering

Unlike the previous two days, Fico allowed the media to pose three questions at the morning press conference. Asked whether he would dismiss Interior Minister Robert Kaliňák and Police President Tibor Gašpar, the PM answered he expected bilateral talks with the chairman of coalition partner Most-Híd, Béla Bugár, on March 12, and then the coalition council would meet. Smer would answer the requests of its coalition partner on March 13 at the latest.

“We will offer such solutions as to keep Most-Híd in this cabinet,” Fico said, as quoted by Sme.

He added that he stood fully behind Gašpar.

“He is an absolute professional and has my full trust,” the prime minister said, as quoted by Sme.

Asked how could Smer ex-MP and current secretary of the State Security Council, Viliam Jasaň, who was doing business with the Italians suspected of Mafia ties, have received security clearance, Fico answered: "There may come a time when you will have to apologise to many people.”

Journalists stand up to PM’s tactics

Meanwhile, the Trend weekly announced it would not report on Fico’s statements as long he spreads nonsense about conspiracy theories involving George Soros and the participants of Kuciak’s burial, while covering serious suspicions and escaping from media questions.

Read also:Who is George Soros and why is Fico’s mention of him a problem?Read more

Shortly before the PM’s press conference, reporter Eugen Korda of the Týžden weekly called on the media to turn their backs on the irresponsible prime minister, for whom his power is more important than peace in the country.

Going further than his party boss, Labour Minister Ján Richter (Smer) claimed on the same day that Robert Kaliňák has the full support of the party leadership.

At their joint press conference around noon, the opposition parties announced that they would initiate a no-confidence vote in the cabinet. However, they lack the votes to possibly succeed in the parliament, unless some coalition MPs join them in the effort, Sme wrote.

Two weeks ago, it may have been sufficient to sack Kaliňák and Gašpar, but now even that is insufficient, Boris Kollár of Sme Rodina said.