Kiska, Fico, and Danko failed to sign a joint declaration. Kiska stresses while their desire for peace is the same, their solutions to the current political crisis are different. 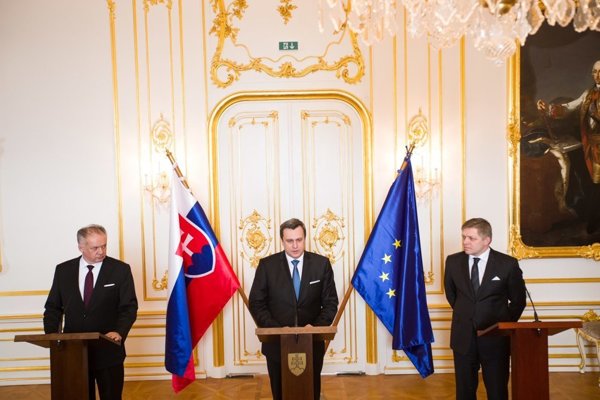 Three top constitutional officials, President Andrej Kiska, Prime Minister Robert Fico, and Parliament Speaker Andrej Danko, met on March 9 to discuss the political crisis Slovakia is going through. They were expected to sign a joint declaration, which states among other provisions that they will not resort to forming conspiracy theories.

In the end, however, they failed to sign the declaration together, but they have agreed on a joint statement that Danko gave on behalf of all three of them.

“We wish for peace to be preserved in society and we, three constitutional officials, will do everything that our competencies allow us to so we can prevent the events of the past days from being abused,” Danko said.

Following the meeting, Kiska repeated there are only two options: government restructuring or early elections. As president, he is obliged to make sure constitutional bodies work properly. That is why he started talks with political parties about their ideas on the solutions.

The president explained that the declaration that his office drafted was not acknowledged by Fico and Danko, who came with their own, very different document.

“I am very sorry as I am sure it would have been an important calming signal,” Kiska said, adding that he still believes Slovak society is able to handle the situation peacefully and freely.