Zuzana Kronerová: I would stand for twelve hours in the street with you

In an interview with Sme, Slovak actress Zuzana Kronerová discusses why she stands with the Slovak people and their pursuit for a more decent Slovakia. 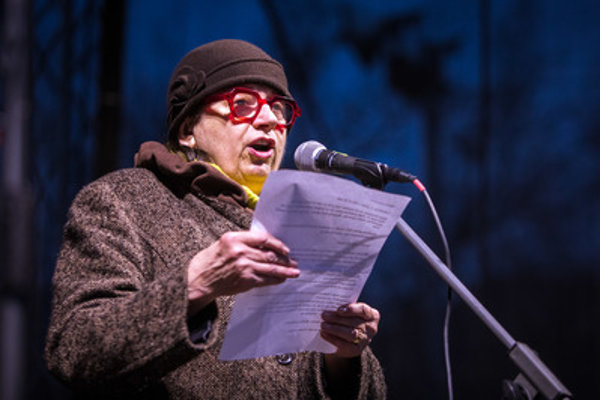 Sme: Politicians have been showing off at conferences for more than three weeks. What do you think of them when you see them act like this?

Zuzana Kronerová (ZK): I travel a lot to Prague, as I rehearse and play there, and so I listen to the radio only occasionally or I read newspapers on the train. I have not seen them showing off on TV or their farces and antics. Probably better so, as I would only have high blood pressure from that, especially considering how many scandals they have already swept under the carpet. They also think they can't be punished which has proven to be true so far. In a normal country, anyone involved in corruption, or even suspected of corruption, would long have resigned on their own. Here, nobody realizes that they should be fair and reasonable or else they could be prosecuted.

Sme: Can you compare the current situation in Slovakia to a certain theatre drama?

ZK: I would select Shakespeare’s cruellest tragedies and his political plays – he has some of these, too. Or ancient tragedies. This is not quite fitting, though, as in these plays, catharsis takes place and those that are to blame are punished. I would love to be wrong but I don’t quite believe in such a catharsis here. I am afraid we won’t get to witness this awful, unforgivable crime be properly investigated. I agree with the mother of (the murdered) Martina Kušnírová; a fully independent international team should come here.

“They simply don’t respect us, the citizens of this country. We are for them sheep; a herd. But they are wrong, most people are decent and competent.”

Sme: The murder of a journalist and is fiancée has fully dominated the public space. What is your stance on the political discourse in families or among friends?

ZK: This is a strange question. I don’t like discourse just for discourse’s sake when people are flaunting and present their views to gain attention and publicity in society. I am rather a shy person. But I can discuss matters passionately if there is a topic to be discussed and I can listen to smart people, too.