The Novichok nerve agent was allegedly used to poison Sergei Skripal, a former spy, and his daughter Yulia on British soil. 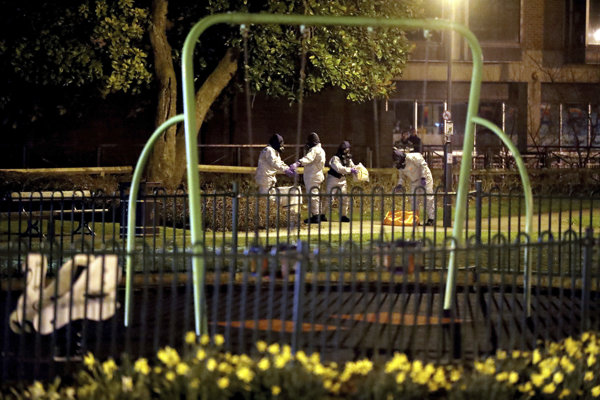 Investigators in protective suits work at the scene near the Maltings shopping centre in Salisbury, England, on Tuesday, March 13. (Source: AP/SITA)
Font size:A-|A+2

On Monday March 19, EU foreign affairs ministers approved a strongly-worded resolution regarding the attack on British soil using the Novichok nerve agent, with Slovakia publicly refuting Russia’s intimations that the agent could have originated from our country, stated Foreign and European Affairs Ministry state secretary, Ivan Korčok, at the session of the EU Foreign Affairs Council in Brussels on the same day.

“I used the debate to reject vehemently any connection with Slovakia,” said Korčok, as cited by the TASR newswire, adding that the speeches given by the chiefs of diplomacy from the Czech Republic, Sweden and other accused countries were in a similar vein. “We consider this to be absurd and unsubstantiated. The debate must turn in a direction where Russia dispels the concerns over the employment of the nerve agent, produced in the Soviet Union in the 1970s and 1980s, and answers the questions raised by Great Britain.”

The Novichok nerve agent was allegedly used to poison Sergei Skripal, a former spy, and his daughter Yulia on British soil on March 4.

European diplomats unanimously concurred that they share the concerns harboured by Great Britain regarding the high probability of Russian participation in this attack and are also troubled by the logical connections with respect to the agent’s origin and the fact that Russia has failed to answer inquiries by Great Britain for many days, according to Korčok.

“Never before has such substance seen use on European soil,” said Korčok. “This happened in an EU member state and to our ally. There’s been a strong expression of solidarity with the United Kingdom and we’re all aware that if this could happen then anything can happen and if in one country then in any country.”