The Slovak Spectator asked foreigners living in Slovakia how they see the murder of the journalist and his fiancee as well as the political upheaval it has provoked. 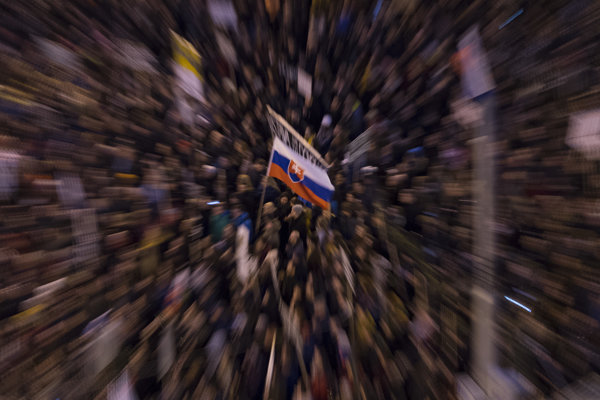 In the past month, Slovakia has been hitting international headlines following the murder of Ján Kuciak and Martina Kušnírová, the resignation of the prime minister who ruled the country for over ten years, and the massive protests in the streets. How do foreigners living in Slovakia cope with the fact that the country they live in is on its feet, the government is down and people in the streets are demanding “a decent Slovakia”?

“I may be a foreigner but I care about this country since I live here and corruption affects everyone,” Thanos Michael from Greece told The Slovak Spectator. Most foreigners living and working in Bratislava whom The Slovak Spectator interviewed feel the same way about Slovakia.

Shocked by the murder

“The murder of a journalist came as a total shock to me, it showed that something is really rotten in the political backbone of this country and that drastic measures are needed,” opined Michael, adding that this is especially since journalists were not killed even during the turbulent years following the Czechoslovakia split.

“All that is happening in Slovakia now is arrogant and unacceptable,” Aneta Czyszczoń, a Pole living in Slovakia, told The Slovak Spectator, adding that the killing of a journalist and his girlfriend was apparently meant to show that “they are able to do anything to anybody”.

“None of us can feel safe now,” Czyszczoń noted.

Matthew Wirtz from the US sees the current situation in Slovakia as a bit of a tragedy.

“Not just because young people have been murdered, but because it took an act like this for the Slovak people to stand up,” he opined.

Other foreigners interviewed by The Slovak Spectator noted that it’s a pity that only a murder of two young people got things to move.

“The murder has evoked the awareness of most of the population on how Slovakia will be shamed and degenerated by the government,” thinks Yen, a Taiwanese man living Slovakia.

Attilio Nisco from Italy believes that a line was crossed and now people are fed up, they want to participate more in politics.

“I have the impression that before the murder, people were tolerating corruption in some way and they were not so willing to read the newspapers and stay informed,” he explained.

The murder of Ján Kuciak and Martina Kušnírová as well as the political crisis that ensued met with massive protests in the streets of dozens Slovak cities as well as cities abroad where bigger Slovak communities live.

The attitude of Slovak people, all the protests and concerts is exactly what should be happening now. Ján Kuciak is dead but his voice is still alive thanks to them, added Czyszczoń.

“I come from Greece where protests tend to be violent, so peaceful protests like these made me want to attend and be a part of this,” explains Michael.

Some of the foreigners The Slovak Spectator spoke to follow local politics closely, some admit that their interest increased in the last weeks.

“This incident definitely made me more involved. I have also noticed a change among Slovaks,” Thanos Michael explained, mentioning his colleagues.

We live here, too

Most foreigners The Slovak Spectator interviewed feel involved in the situation.

“We foreigners live here, too. It’s our home,” noted John Thompson from the UK. He feels it as an obligation to support Slovaks with their demonstrations against what he sees as a corrupt government with connections to the Mafia.

James Griffith from the US opined that when he first arrived not too long ago, there seemed to be a kind of resignation to what was taken to be a far-reaching amount of corruption. The murder of Kuciak and Kušnírová appears to have been the last straw.

“I admit to being surprised at first at how intense the reaction was, but I also think it’s impressive just how many people from all walks of life in Slovakia, or at least Bratislava, seem to have decided they aren’t going accept the corruption anymore,” Griffith explained.

Attilio Nisco, as an Italian, felt very involved when at first seven Italians were arrested.

“I was afraid that this could be bad for our image,” he explained. It was easier to blame the Mafia, but it is still too dangerous to investigate some Slovak politicians or business oligarchs, he noted.

Some of the foreigners The Slovak Spectator talked to attended all the protests, some only one due to the language barrier but some are not participating.

“This is the country I live in, already a part of me,” she said, adding that it is impossible not to react when people are killed because of freedom of speech or, even worse, because of who they love.

“It’s been exciting to be a part of a moment in a country’s history that might really bring about change, whether I’m a citizen or otherwise,” said James Griffith.