The delayed construction should start in summer 2018. 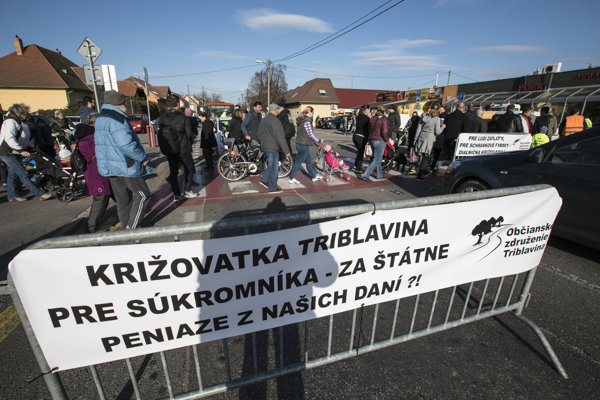 In March 2017, the project of Triblavina junction caused protests in the Vajnory borough of Bratislava. (Source: TASR)
Font size:A-|A+

After almost three years, the Transport and Construction Ministry has issued the construction permit for a changed project before completion of the Triblavina junction on the D1 section Bratislava – Senec.

The highway should be ultimately widened to four lanes in each direction, without parallel collector communications to service traffic to and from surrounding municipalities, the civic association OZ Triblavina informed the SITA newswire on March 21.

Activists want to use all legal means to reverse this process and expect Bratislava Region (BSK) and the municipalities adjacent to the junction to do the same.

“The Transport Ministry issued the permit even though the process of the project change is illegal; it contradicts the regional site-planning, and the public's interest,” Milan Grozaj, chairman of OZ Triblavina, told SITA. “Transport Minister Árpád Érsek and Environment Minister László Solymos from the junior coalition partner Most-Híd preferred interests of a developer with links to Viktor Stromček rather than the interests of citizens”.

The association also noted that the murdered journalist Ján Kuciak and his Aktuality.sk colleague, Veronika Šmiralová, wrote about this case, focusing on the background of the developer company Starland.

Works to start in summer

The works on the junction should be renewed by summer 2018, the Sme daily wrote, adding that it shall be finished by summer 2020.

The winner of the tender will do the work, the ministry's head of the road transport and roads section, Peter Varga, informed. He also said, as cited by Sme, that a widening of the D1 highway from Bratislava to the Triblavina junction has not been approved yet.

The construction works are not expected to bring many complications to nearby municipalities, as three lanes should be preserved and a total of three roundabouts will be arranged.

Local representatives criticise the project, according to Sme, arguing that it does not reflect the increase in inhabitants foreseen for this area.