The Slovak Volkswagen plant needs to hire new staffers, and plans to look for some of them in Serbia and the Ukraine.

The autimotive industry is one of main pillars of the Slovak economy. (Source: Courtesy of VW SK)
Font size:A-|A+

Bratislava-based German carmaker Volkswagen plans to hire people from Serbia and the Ukraine in 2018, as it needs to fill more than 500 vacancies by the end of the year.

“It is very difficult to find experts and therefore we are considering employing people from Serbia and the Ukraine in a very limited number,” Eric Reuting, a member of Volkswagen Slovakia's Board of Directors for human resources, told the Sme daily. “Hiring Slovaks remains our priority, though.”

New jobs are being offered in production – especially in assembley, in the car-body shop and in the paint-shop. The hiring is connected with the new SUV models – the Porsche Cayenne and the Volkswagen Touareg, the daily wrote on March 22. The plant also plans to launch the production of the new Audi Q8.

Thus, VW Slovakia could exceed the threshold of 14,000 employees and become the biggest employer in the country, beating even the state-owned railway, Železnice SR, and the Slovak Post.

Currently, the carmaker is offering about 13,700 jobs, of which around 30 are taken by Serbs – who have the status of Slovaks living abroad – and around 500 taken by workers “borrowed” from the Hungarian Audi plant.

For now, employers have to register vacancies with the Central Office of Labour, Family and Social Affairs and publish them for 30 days. Only then, can businesses hire people from outside the European Union.

This process will be simplified, however, from the beginning of May. The Volkswagen plant in Devínska Nová Ves (borough of Bratislava) planned to hire foreigners last year, and the simplification of procedure – which will concern only selected jobs in districts with an employment rate lower than five percent – will play into its hands. 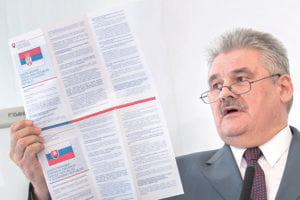 The VW workers are expected to be accommodated directly in Devínska Nová Ves but the reactions of locals are not expected to be as emotional as in Sereď where inhabitants gathered to protest against the construction of worker's quarters, Sme wrote.

Other Slovak carmakers, the Korean plant of Kia in Žilina-Teplička, and the PSA Group plant in Trnava-Voderady employ non-EU foreigners, too. About 800 Serbs currently work for PSA, mostly as Slovaks living abroad. Kia has tentatively hired a few Bulgarians – who are EU citizens, however, and so employing them is simpler, Sme wrote.