Slovak cyclist Peter Sagan wins the Gent - Wevelgem for the third time in his career. 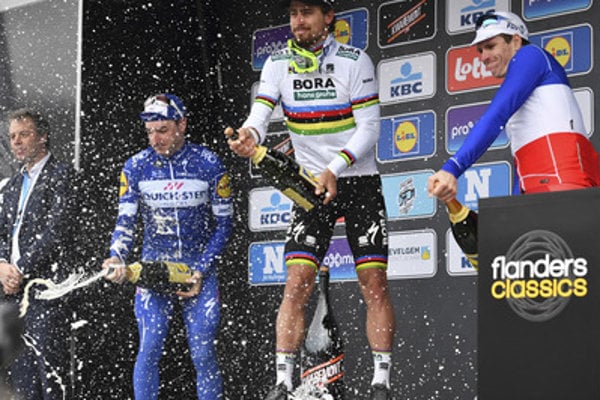 Slovak cyclist Peter Sagan often drives his rivals to desperation at the very finish of races. After last year’s World Championship in Bergen where he was hardly seen in the lead, he dominated in the end.

This time around, in the March 25 Gent – Wevelgem race, Sagan was the first to sprint from the final group. While his rivals tried to catch up with him, they caught him only after the finishing line, the Sme daily reported.

Italian Elia Viviani, who believed in his victory until the very last moment, showed his anger and later even cried – despite finishing second. He called this defeat the hardest in his career.

A sprint is always a lottery, Sagan said for the website of his Bora-Hansgrohe team, adding that he felt excellent, knowing he "has legs". It was a different Gent – Wevelgem than any other I have competed in so far, he also noted. It was not mad like in previous years, but we raced at great speed nevertheless, he summed up.

After previous waves of criticism, Sagan also commented that he does not pay attention to critics and the things they write in newspapers. "Why should I?" he asked, opining that when you are good, you are good and when you are not successful, you always find some critics. "That’s life!" Sagan told the Cyclingweekly.com website.

Sagan won the Gent – Wevelgem for a third time, after victories in 2013 and 2016. He thus became the fifth record-holder to managed this including icons like Eddie Merckx and Mario Cipollini, Sme reported.

Next week, Sagan will participate in the Tour de Flanders 2018.