Education Ministry has made little progress

Since the last election, nothing has changed in the Slovak education sector. 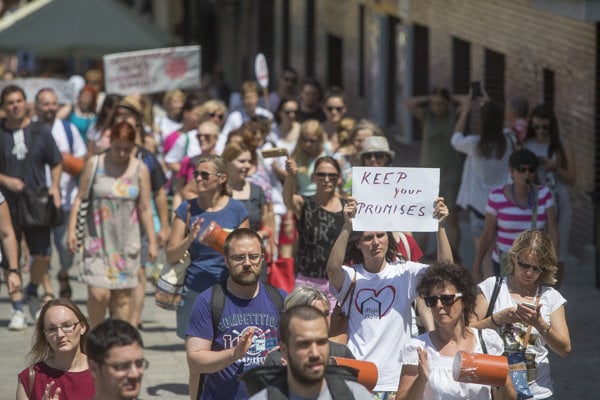 The Comenius choir was ready to sing in the governmental Bôrik hotel for the start of the festive ceremony. At the end of March, the Education Ministry celebrated Teachers’ Day (March 28). On this occasion, more than 60 teachers and lecturers were awarded for their work.

The planned start of 11:00 had been postponed, however, as everyone was waiting for the Education Minister, Martina Lubyová (SNS). She arrived 20 minutes late, apologising and explaining that due to the turbulent March events, she had to address urgent issues.

The ceremony that followed was somehow reminiscent and symbolic of the state of the Slovak education sector. The laboured presentation of the host, the ostentatious style, the use of formal phrases between the ministry representatives and the teachers.

Shortly after the scientist Lubyová was nominated by the Slovak National party (SNS) for the position to replace the office worker, Peter Plavčan, the new minister said one of the reasons she accepted the offer was because “nationalistic feelings” connect her with SNS. In this tone, the choir sang the hymnal song Aká Si Mi Krásna, hailing the beauties of Slovakia, at the end of the programme meant for teachers. At times, the atmosphere in the hall was reminiscent of the communist-time celebrations of 30 years ago.

When Martina Lubyová, long-time academic from the Slovak Academy of Sciences and daughter of its former chairman Štefan Luby, came to work at the ministry, the expert public had hope that things would improve. 18 months later, most people have abandoned the initial enthusiasm. 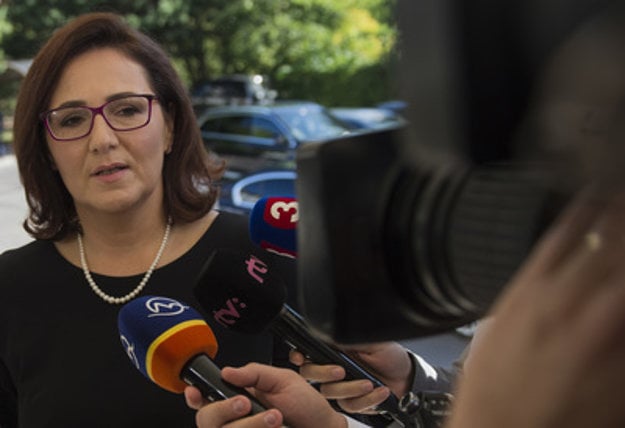 “It was expected that as a scientist, Lubyová would think conceptually, which is a very rare and missing thing at the ministry,” Juraj Hipš of the non-governmental Komenský Institute says. “It turns out that there's no guarantee that a scientist will manage the ministry well.” This lack of conceptual thinking was obvious a year ago when the ministry reacted to growing extremism by simply adding one extra lesson of history a week at schools.

Hipš claims that Slovak education is in coma. He sees the biggest problems in primary and secondary schools which Lubyová does not understand at all, according to him.

“No one of sound mind can expect anything from the ministry now,” Hipš says.

The platform To Dá Rozum (Learning Makes Sense) cannot evaluate the performance of the new minister, wrote Renáta Hall, who focuses mostly on university education. In the past two years, the ministry has only prepared changes, and so virtually nothing – good or bad – happened.

“The Education Ministry is more demoralised than it was when ex-minister Plavčan was recalled,“ Vladimír Crmoman of the Slovak Teachers’ Chamber claims.

Changes that cannot be done

The Education Ministry is demoralised in part by a delay in the biggest school system reform of the past 25 years. A year ago, six experts finished the Learning Slovakia document, comprised of more than 200 pages, which should have fundamentally changed the method of teaching in the country. In mid-October 2017, Lubyová deemed the document unfeasible. Now, ministerial expert teams are rewriting the theses into another document – the National programme of Pedagogy and Education Development.

“The minister diverts attention from addressing real needs of students and teachers by inventing pseudo-problems,” Crmoman opines. He claims that Lubyová has postponed the solution of all other essential problems indefinitely.

The Education Ministry should draw €1.46 billion from EU-funds by 2020.

“She fails to meet the deadlines she set herself, doesn’t act transparently, and doesn’t publish work groups, which allegedly participate in the programme,” he says. “If the fundamental reform took place as soon as tomorrow, its first results can be expected only by 2027,“ Crmoman sums up.

At the end of March, the ministry announced the programme of education development was prepared for comments but will be tabled until “the political situation has been stabilised”. The programme is still missing among the materials published and the ministry has not revealed details of its contents so far. The minister only said that the reform could cost about €1.2 billion.

Apart from the yet-to-be-launched education reform, Lubyová also inherited from her predecessor, Peter Plavčan, the scandal involving EU-funds. Plavčan had to leave by the end of summer 2017 due to the outrageous allocation of hundreds of millions of euros from European Union finances for research and development.

The companies who benefited the most had nothing to do with research when they received subsidies amounting to millions for various scientific projects. The issue was mainly the criteria for evaluation.

The Supreme Audit Office (NKÚ) wrote that the internal control system at the ministry failed. “It is insufficient and processes are not in compliance with principles of effectiveness, usefulness, and the ban on conflict of interests.” NKÚ sent its findings to investigators, who have been checking on the allocation since last summer. The National Anti-corruption Unit has been involved, but police spokesman Martin Wäldl refused to elaborate more in detail.

Due to the botched allocation of hundreds of millions of euros, all calls and projects of the past nine months have been stalled. Currently, they are gradually moving on, and before the end of the programme period, by 2020, €1.46 billion should be drawn. As for now, only contracts worth €50 million have been signed.