How a furniture hit is produced: IKEA’s Billy is from Slovakia

The plant in Trnava has been operating since 1993, daily exporting furniture to the whole world. 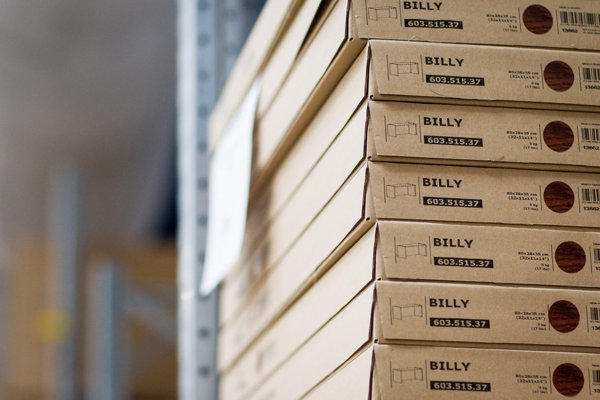 Every ten seconds, one piece is sold somewhere on the globe. People of the middle classes especially but also students in dormitories have them in their rooms, flats or houses.

The price begins at €30 but a bigger model can cost up to as much as €300. It is sold in several different sizes and colours. You can design and combine how it will look in your home. The Billy bookcase, sold by the biggest global furniture chain, IKEA, is their most popular product. If you have one at home you may nevertheless not know that it has been made by Slovaks.

You cannot miss the blue-and-white building of the IKEA Industrial plant when driving along the R1 dual carriageway to Trnava. It covers an area of 125,000 square metres.

The pitch of the Anton Malatinský football stadium would fit almost 18 times into the premises.

Straight away when entering the complex, you can smell wood. We have to wait at reception, allegedly due to security. Nobody is allowed to move around arbitrarily, although the door-keeper handed us a small map.

“The plant in Jasna, where the solid pine wood is processed, has the nicest smell,” head of the Trnava plant, Juraj Kubiš, says.

He leads us across the complex but even before we take a look into the production hall we have lunch. There is a small canteen for employees, offering three or four dishes to choose from. However, the traditional Swedish meat balls are not on offer.

Across from the dining hall, we walk to the raw material store but before entering, we have to undergo safety instructions. We receive work shoes, high-visibility vests and yellow ear-plugs. The noise inside could damage our hearing, we learn.

The raw material store is in fact a big hall with a high roof. Here, in heaps, is everything people need to make bookshelves - packages with chipboard, veneer components, massive edgings. Employees drive the chipboard to the sawmill with fork-lift stackers. One pallet can weigh up to four tonnes, i.e. the equal of two or three full Volkswagen Golf cars. 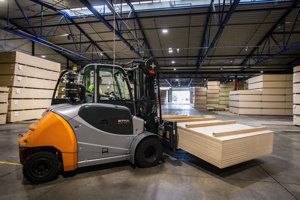 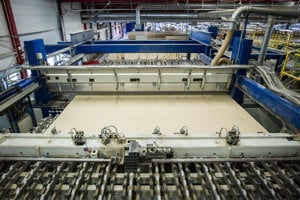 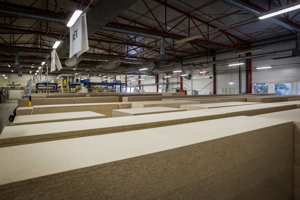 Sme was unable to talk to the plant’s employees due mainly to safety reasons: most of them worked with earphones at huge, noisy machines. Each of the machines is operated by one to three men. Women are found only in the packaging room.

In the store where the chipboard is prepared for furniture production, the wood is mostly from Slovakia. The chipboard, produced locally, is put to the saw. There is only one such saw in the whole plant. It processes up to 110,000 cubic metres of material. The saw automatically cuts huge panels of chipboard into furniture components. After loading the material, the feeder controls the number it can cut at one time by the thickness.

The saw throbs and cuts the chipboard into smaller pieces. You can feel the sawdust in the air. We start to feel hot in the thick work boots and we have only been here for less than ten minutes, not to mention that it is not yet the hottest part of the summer and we do not have to manipulate the boards.

The raw cut pieces of the future bookcase continue to the pressing-shop. In total, there are three presses in the plant that process the veneered components from Majcichov. Veneer is a thin layer of wood used for the surface treatment of boards. It is made by sawing thin layers from the tree trunk.

“The sawed veneer is then – so to say – cooked and sliced on the machine,” Kubiš explains. “We buy it already sliced from Poland and the Czech Republic. In Slovakia, veneer for furniture is not produced,” he adds. The veneer is only processed in the Majcichov facility where it is stapled and cut to size.

Pieces of sliced chipboard run on the assembly line where big cylinders are putting glue on them. If the product is seen from both sides, the machine has to press the veneer at high temperatures on both sides.