They earned a $10,000 Grand Prize from Brewer Foundation 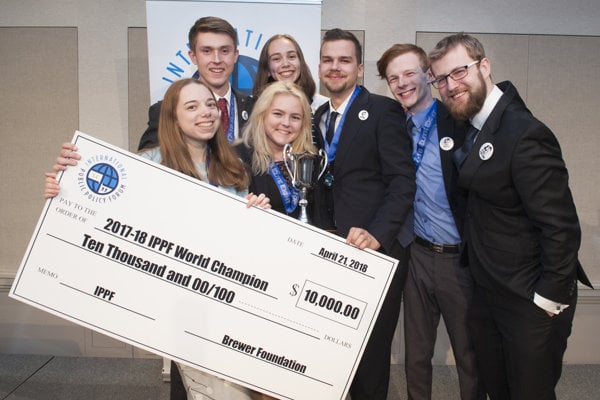 A team of students from the Bratislava-based LEAF Academy bested high schools from around the globe on April 21, winning the 17th Annual Brewer Foundation/New York University International Public Policy Forum (IPPF) debate competition and a $10,000 grand prize. The final debate was held at The Harold Pratt House in New York City, the organisers informed.

The teams that competed in the IPPF Finals were the final “Elite Eight” teams to emerge from a field that began with 161 teams representing high schools in 17 countries and 30 US states. The teams debated the topic “Resolved: International climate accords for greenhouse gas emissions should adopt binding enforcement mechanisms”.

LEAF Academy was named the IPPF World Champion after arguing in the negative. The team was coached by Branislav Fečko-Čegiň, and the team members were Matej Čerman, Jasna Cifrová, Lucia Jaďuďová, Timofej Kožuchov, Sára Lovecká, and Samuel Ján Nvota. The team receives a $10,000 grand prize ($5,000 for the school’s debate programme and $5,000 in individual scholarships).

“These student debaters put in months of hard work to achieve the title of IPPF World Champion,” said William A. Brewer III, partner at Brewer, Attorneys & Counselors and founder of the IPPF. “They impressed the judges with their superior research, writing and advocacy skills.”

He added that the students dedicated much of their school year to understanding one of the most significant and far-reaching public policy issues of our time - climate change.

The top eight teams competing in the IPPF Finals represented schools in five US states, China, Taiwan and Slovakia. The IPPF Finals give students the opportunity to participate in oral debates in front of some of the world’s foremost experts in debate, business, law and politics.

The 2017-18 competition began in October 2017, as 161 teams submitted qualifying round essays on the topic.

Founded in 2001, the IPPF is the only competition that gives high school students from around the globe the opportunity – for free – to engage in written and oral debates on issues of public policy.