Groundwater in Žitný Ostrov is contaminated

The environment minister warned that similar incidents of contamination could reoccur due to herbicide use in the past. 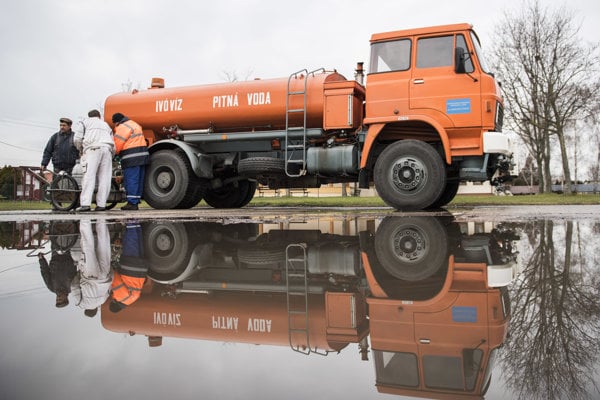 By the end of 2017, six villages in ŽItný Ostrov could not use water from piping due to atrazine contamination. (Source: TASR)
Font size:A-|A+

The Water Policy Institute has filed a criminal complaint against an unknown perpetrator for the contamination of ground water with atrazine in the Žitný Ostrov area in south-western Slovakia, alleging environmental harm and a threat to human health.

Atrazine, the poisonous herbicide, can appear again in the drinking water in Žitný Ostrov villages and towns, Environment Minister László Sólymos said April 25, as quoted by the Sme daily. He has also initiated extraordinary checks of farmers.

Sólymos explained that atrazine was used in agriculture between 1998 and 2005. In those seven years, about 40,000 kilograms of the chemical seeped into this area.

“In this way, atrazine got into the soil there, and it will take some time before it decomposes,” the minister said. “We have to accept that it will last for several years until it is fully cleaned.”

The Ministry should monitor the situation and if the contamination is repeated, they must react again. “To react flexibly and effectively, we are preparing a law on areas protected due to their water-management importance, which would involve all the ministries concerned – i.e. agriculture and health,” Sólymos said, as cited by Sme. The current situation involving several state institutions overseeing the quality of water should thus changed, and the law – to be adopted as early as this year – should unify proceedings and expand public information on potential water pollution.

By the end of last year, six villages in the Dunajská Streda district were hit with water contamination but the situation is now already under control: five were connected to the Western-Slovak Water-management Company which installed a carbon filter, effectively filtering the contamination. The sixth village has its own water piping, and it should be financed by the Environmental Fund so they can put a carbon filter on the piping, Sólymos said.

What is atrazine and why is it harmful?

Atrazine is a herbicide used in the past to kill weeds in agricultural crops. Its presence in drinking water is limited by a Health Ministry regulation.

The Water Policy Institute is a non-governmental, non-profit organsiation that has been arguing on violations of water legislation for a long time. Most recently, they filed a motion with the police, charging an unknown perpetrator with the crimes of harming the environment and threatening public health, they wrote in a press release.