A mother of five from Košice, founder of the Maják (Lighthouse) association to help families in emergency situations, receives award in a pilgrimage town in Italy. 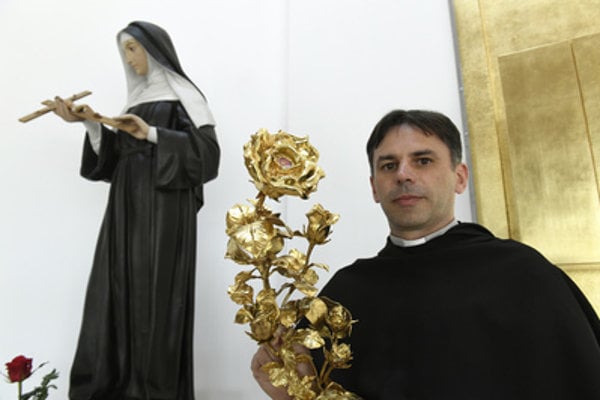 The relic of St Rita of Cascia, the patorn-saint in hard situations, was boroght to the St rita Church in Košice; it is held by the minister general of the Augustinian order, Juraj Pigula. (Source: TASR)
Font size:A-|A+24

Soňa Vancáková from Slovakia received the international award of St Rita, bestowed annually on personalities who are outstanding in features typical for this saint: serving fellow people, perseverance, humility and the courage to accept one’s fate.

Vancáková of Košice, mother of five, is the founder of the Maják (Lighthouse) association to help families in emergency situations, the Vatican News website wrote.

She received the award from the general head of the order of Augustinians, Alejandro Moral Antón, on May 21 in St Rita’s Basilica in the Italian pilgrimage town of Cascia, the TASR newswire wrote.

She received the recognition for her faith in the value of family and fighting for it. This year, two additional women, who are Italian, became “Women of St Rita”: mothers of the engaged couple who died in the fire at Grenfell Tower in London (for “accepting their cross in the power of the faith”). The fourth woman, Giuseppina Caccaroni di Gualdo Cattaneo, for “the courageous overcoming of life's obstacles and for serving the fellow people”.

On the evening of May 21, the travelling “torch of peace” arrived in Cascia from Košice. Every year, it symbolically connects one selected town with Cascia. This year, its sister city is Košice, where an Augustinian community is active and a new church bearing the name of St Rita was consecrated on May 8.

St Rita, the patron saint of insolvable situations, is currently one of the most popular saints in Italy, also around the world. She was an Augustinian mystic who lived at the turn of the 14th-15th centuries, and had a difficult life: she was a wife and mother of two sons but later became widowed, both her children dying as well. She stood out for her hospitality, love for her neighbours and fellow people, willingness for dialogue and the ability to forgive, TASR wrote.