Watchdogs point to the new police president's past contacts and property issues. Gašpar does not rule out a future in politics. 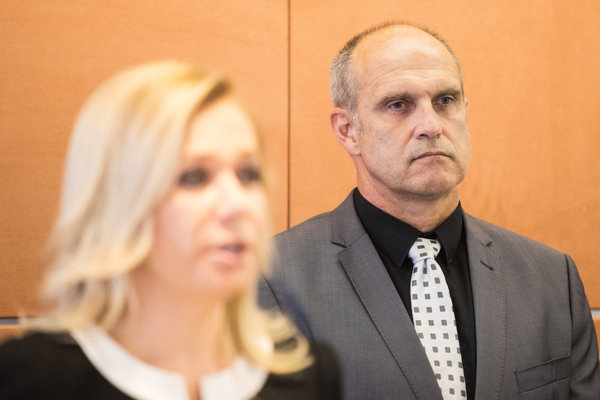 Milan Lučanský will be the new Police Corps president.

Lučanský, who served as director of the police inspectorate running under the Interior Ministry, will take over on June 1, after Tibor Gašpar leaves the post by the end of this month. He will only serve as interim president of the Police Corps, until the new man or woman is selected for the post under the new rules, which are expected to be passed this autumn.

In line with her earlier statements that the changes in the top police management will go beyond the presidental post, Interior Minister Denisa Saková also announced the names of new deputy Police Corps presidents, Róbert Bozalka and Jana Maškarová, who will become the first woman in the top police leadership.

"While others were afraid, he faced organised crime," Saková said about Lučanský when she announced his nomination to journalists on May 30.

Lučanský has been a member of the Police Corps since 1990. He served in one of its top posts between 2012 and 2016 as deputy Police Corps president. Afterwards, he led the police inspectorate running under the Interior Ministry, which deals with suspicions of unlawful conduct of police officers and has faced independence concerns from the previous ombudswoman in the past.

During his early career, Lučanský worked in the field. Minister Saková stressed while presenting him as the new Police Corps president that it is thanks to him and his team that big names in organised crime, like the Banská Bystrica underworld boss Mikuláš Černák, are in prison.

Lučanský, however, also faced allegations of links to people from the underworld in the past. He was reported to have met with the late mafia boss Ľudoít Sátor in Hungary. He is dodging the allegations by saying that the people who accuse him of contacts with criminals have also had links to criminals in the past.

Along with his colleagues, Ivan Šefčík and Jozef Mičieta, Lučanský left the police corps during the 2010-2012 government of Iveta Radičová, and rejoined the forces only after the March 2012 elections, which brought Smer back to power. The three men filed a libel lawsuit and a criminal complaint against their former boss, Jaroslav Spišiak, demanding damages of €300,000, alleging that Spišiak committed libel when he told the media that when they were in their positions in the police’s Office for Fight against Organised Crime, the international fugitive Karol Mello remained at large. Spišiak also reportedly stated that after these three individuals left the police corps, Mello was arrested in Poland. Spišiak faced charges based on their complaint, but the charges were dropped in 2014.

Earlier this year, opposition MP Lucia Ďuriš Nicholsonová claimed she had proof Lučanský blackmailed entrepreneurs in the Žilina Region and acquired an apartment in Florida in an unlawful way.