What were the first foreign trips after the 1989 Velvet revolution like?

Slovaks tended to travel with canned meat and thermos flasks and sang on the buses for hours. When Italians saw a Czechoslovak bus, they locked the toilets. Very old buses – or anything that moved, in fact – were used for travelling. Sausage smells followed the tourists wherever they went and in many shops, signs saying “Do not steal, God sees you” welcomed them. 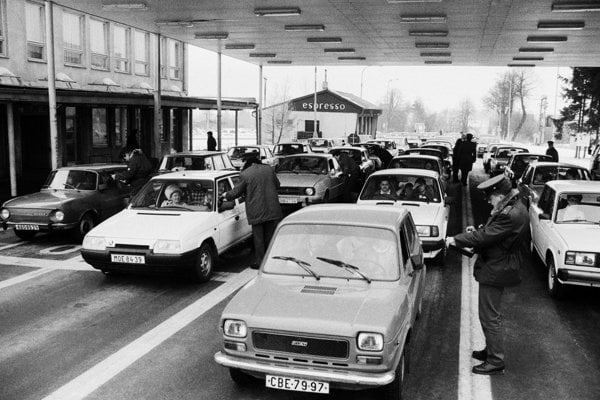 After the 1989 revolution, everyone wnated to travel to the West, which caused long queues. (Source: ČTK archives)
Font size:A-|A+36

After 1989, when Slovaks and Czechs started discovering the world beyond the Iron Curtain, it was the experience of a lifetime – and not just for them. The first destination for mass tourism was Vienna which was closest.

“On the very first day of general freedom, Austrian TV planned a live broadcast from the Berg, the Petržalka border crossing but they left disappointed. They wanted to depict a euphoric flow of Slovaks but there was none: It wasn’t until the next day that everyone swarmed abroad,” tourist guide Marián Bilačič recalls.

People were still waiting for the small amounts of foreign currency the state gave them from foreign-exchange stock and it took some time for them to arrange the trips logistically.

“People queued in front of the travel agencies eager to travel anywhere,” Bilačič who has been guiding tourists for various travel agencies since 1984, says. “But there were few good-quality buses which could travel abroad and those who had foreign currencies were preferred.”

“We could now see everything we knew from the photos first-hand,” owner of the CK Mistrál travel agency and guide Alžbeta Sopušková recalls of her first trip to the West. “It was absolutely fantastic. The Austrians welcomed us with two lifted fingers – the sign of our “Freedom Movement”, VPN.”

In the posh street of the Austrian capital, Maria-Hilfer-Strasse, the Slovak language became dominant over everything else. Many saw, for first time with their own eyes, products they had known only from TV. In parks in downtown Vienna, our tourists sat with Thermos flasks and snacks for at that time even coffee in Vienna was too expensive for them.

Despite their lack of resources, people shopped like mad. They lugged along whole boxes of electronics which were unavailable in Czechoslovakia, cheap perfumes and kilogram-packages of coffee. Often, they didn’t find out that the goods were poor quality until after they arrived home.

“Many wanted to visit a sex-shop,” Bilačič smiles. “Some even had the ungodly wish to see what a brothel looks like but after they found out the prices, their hots quickly disappeared.”

Austrians were surprised by how fast the borders opened and the huge masses of tourists that flooded from the East to visit them.

“The influx of old Škoda cars and buses many of which were beyond use, people clad differently, mostly the language barrier, crowds window-shopping without really buying anything, all caused quite a natural mistrust,” Darina Kmeťová of the Satur travel agency – who then worked at the Travel Agencies’ Administration Čedok – narrates. “A few individuals left without paying, which initially gave the Slovaks a bad reputation. Signs in Slovak saying, “Do not steal, God sees you” were installed in many shops.” The signs striving to prevent shop-lifting were also in Czech and Hungarian.

“I experienced a situation where two members of my trip were missing when we were leaving Vienna;” Bilačič notes. “We learned that they had been caught by the guard, stealing from a shopping centre.”

Despite the warnings, most Austrians were nice to our tourists, according to the guides.

“I remember a mother with her small daughter in a shopping centre,” Bilačič recalls. “The daughter wanted a doll and kept taking it off the shelf but her mom did not have the money to buy it. An Austrian stranger bought it and gave it to them.”

Some Slovaks had their “dream-come-true” in Vienna in those times: for one teenager, it was his first Coca-Cola.

“You could get it in Czechoslovakia but it was too expensive – it cost five Czechoslovak crowns,” Bilačič tells. “So, his mother did not allow him to buy it. In Vienna, he bought one and drank it, saying he had fulfilled his great dream.”

Most people headed to Vienna mainly for the shopping but many were interested in the monuments, too. The Austrians offered us, not just city public transport for free, but also the chance to visit all the museums without admission fees.

“After the (Velvet) Revolution, the crush in the Schönbrunn Complex was so huge that it was all but impossible to push through,” guide Beata Lenhardová says.

After the Vienna “test”, eager Czechoslovak tourists were able to dare further trips for culture to more distant European metropoles. After a long night and many hours on the bus, they eagerly rambled the cities on foot, only to travel back home on the bus again overnight. Not having too much money meant that accommodation, if any, was usually for one or two nights in cheap hotels or camps.

“It started with snap operations – people set sail; they were happy to get just somewhere- anywhere…” Bilačič explains the modest demands of Slovaks.

“They were enthused but around noon, I had zombies schlepping behind me,” Sopušková recalls of the trips to Paris. “A deadly, heavy fatigue, after hardly any sleep, overcame them.”

People were happy and the atmosphere on the trips was fantastic. Following the individuals, whole schools and work teams set off and entertained themselves excellently. They sang the whole way, never minding the long queues at the borders, according to Kmeťová.

“The chance to be among the first to travel – and to be able to say I was in Venice or Paris – was primary and no suffering could stop them,” Kmeťová says.

Sometimes the rows of buses were so long on Friday nights that they filled the road all the way from the Grassalkovich Palace in Bratislava to Freedom Square / Námestie Slobody.

The travellers were very thankful and often gave gifts to their tourist guides. “Those were unbelievably euphoric times. Some gave us apples, others, cigarettes. Still others poured us slivovitz,” Bilačič recollects.