Following the deadly attack on a Filipino expat, the Sme daily offers an overview of other fatal attacks that took place in Bratislava. 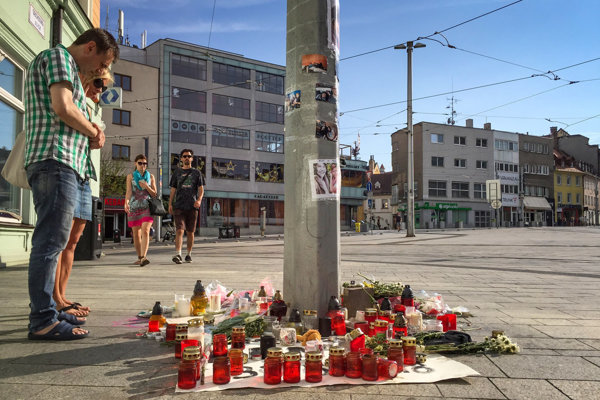 Death for a taxi

Last October, a 37 year-old football-player was killed in Bratislava during a trivial argument concerning a taxi. On a Saturday night, the footballer and his Ukrainian friend went out and when they were returning around 2 in the morning, a fight broke out revolving around the taxi.

The Ukrainian man got into a verbal quarrel with an Indian man, aged 37, who received Slovak citizenship two years ago. The Indian cut the Ukrainian on his face and when his friend came to help him, the Indian attacker hit the friend in his neck. He died on the spot. The police were summoned and detained the perpetrator near a nightclub close to St. Michael’s Gate, about 500 metres from the crime site.

The attacker was charged with murder and faces 15 to 20 years in prison. Even though he later asked to be prosecuted at large, the Bratislava Regional Court ruled in March that he will remain behind bars until the trial has been concluded.

One of the most famous street murders on Slovakia remains unpunished almost 13 years after it occurred. On a Friday in November 2005, a student of the Faculty of Fine Arts of the Comenius University, Daniel Tupý, and seven other students were attacked from behind at the Tyršovo Embankment in Bratislava by about 15 people. Although the attack itself lasted for just a minute, the neo-Nazis used knuckles and knives, injuring six people, one of which was seriously hurt.

Daniel Tupý died after he was stabbed eight times. The police arrived within three minutes to the crime site but they made several mistakes and did not start looking for the perpetrators immediately.

Richard H. and four other young men were charged with attempted murder and disorderly conduct. Two of them were allegedly members of the local gang Piťovci. They were all acquitted in 2009, however, and in August 2012, police stopped the criminal prosecution. The prosecutor ascribed this to lack of evidence.

Murder in front of the Kryštál Bar

On the night of November 5, 2001, student Peter Jerguš returned home through the city centre after celebrating his 23rd birthday. When he saw two men beating someone in front of the Kryštál night bar, he defended the victim. Suddenly, one of the men took out his pistol and shot the samaritan in the head.

The seriously injured youth was then packed in the murder's car boot; they probably wanted to dump him and get rid of the body. They were stopped by a police patrol but the student could not be helped anymore. During the court proceeding, it turned out that the brawl in front of this night bar in Mariánska Street was part of the racketeering activities of both defendants. The case was concluded in courts seven years later.

The murderer, Peter Kuchár, received 19 years in the prison with the strictest regime. The second criminal, Peter Lieskovský, received 10 months and 16 days for bodily harm. The student victim was the great-nephew of the Nobel laureate of Slovak origin, Daniel C. Gajdušek.

Shoot-out in the Irish Pub

In Bratislava's Irish Pub on Sedlárska Street, a shooting took place early evening on Wednesday, July 9, 1999. According to investigators, Ľuboš Zelman was the one who started it, and he came to the bar after he was ordered by his boss and head of the mafia gang Piťovic, Juraj Ondrejčák, nicknamed Piťo, to kill the Štec brothers.

The bullet fired ran across the shoulder of one of the brothers, Marián, and killed one of the unwitting guests, Tomáš Arnold, aged 26. The second brother, Ján, was then shot to death by Zelman, according to police. Panic spread in the bar, and the murderer managed to escape.

National Security Authority (NBÚ) Ján Mojžiš, who was sitting outside the bar when the shooting took place, was an indirect witness. At that time, he was the head of the Slovak Intelligence Service’s (SIS’) analytical department. The murderer was identified only in February 2016. Last year, Zelman confessed to perpetrating the attack but the criminal prosecution was stopped as the case has been time-barred since 2002 (as it was qualified as bodily harm, and not a homicide).