For a Decent Slovakia organise another protest for June 22

At the same time, they are suing ex-PM Robert Fico, in response to his statements made during the protest rallies in February, citing fear-mongering and defamation. 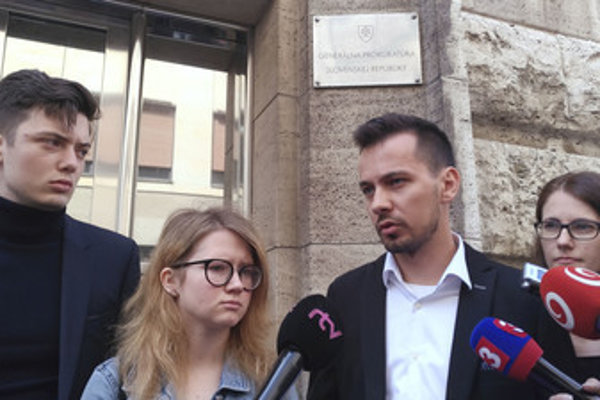 Representatives of the For a Decent Slovakia initiative filed an official complaint with the General Prosecutor’s Office against MP and former prime minister Robert Fico of the ruling Smer party for fear-mongering and defamation on June 15.

This action comes as a response to Fico’s statements about the team behind the public rallies that erupted in Slovakia in the wake of the murders of journalist Ján Kuciak and his fiancée Martina Kušnírová in February.

The initiative said that they have been hearing accusations about them for months now concerning the alleged preparation of a coup d’etat, the disintegrating fabric of society, the group’s supposed collaboration with foreign powers and the Hungarian-born American businessman George Soros, as reported by the TASR newswire.

“At first, we ignored it,” said initiative member Juraj Šeliga, as quoted by TASR, but last week, after hearing Fico repeat the same claims all over again, they decided to “sit down and examine all his statements going back over four months” and take appropriate action.

Fico tried to incite fear in the public during the time he served as prime minister (2012-2018) when he issued a statement concerning the destabilisation of the country and the presence of pavement blocks stacked and hidden near the Slovak Government Office – ready to be used to cause disruptions to public order, according to the initiative representatives.

“We have information obtained from a police source that confirms no incidents happened during any of the public rallies,” Šeliga told TASR. “No buildings were violated and no public property was damaged. Neither Fico nor anyone else can do as they please and attack people.”

He added that Slovakia is a democratic country and people have the right to express their opinion and call for a new and decent government.

The initiative claims that Fico is trying to create an imaginary enemy. The group members have collected at least 50 pages of documentation detailing attacks against the organisation team.

“We cannot simply overlook these acts, we have to voice a decisive No,” said the initiative’s leading member Karolína Farská, as quoted by TASR.

The criminal complaint is a “good move”, as it opens the door for a public discussion about which advisors were involved, who is paid by whom and how the billboards were prepared, former prime minister and current MP Robert Fico said on June 15.

“If they want this, it could become a topic of public discourse,” the ex-PM said. “But if they are so decent, why do they not voice their opinion of Andrej Kiska as well? I want us to talk about everyone equally, using the same standards,” he added.

Another protest in Bratislava

The group have announced another public rally to take place at 17:00 on Friday, June 22, in Bratislava. The participants will meet in front of the Government Office and will then move to SNP Square. Also Banská Bystrica and Košice will host the gatherings, starting at 18:00. The aim is to show the public that their fight for a decent and fair country is far from being over.

“We want to tell the people that these issues have to be called as they are but simultaneously a vision for the country has to be presented. We have to let the politicians know loud and clear that they cannot act with impunity,” Šeliga concluded, as quoted by TASR.