One joke got out of hand while a false declaration was used to promote the anti-immigrant agenda. Here are some recent hoaxes spreading on social media. 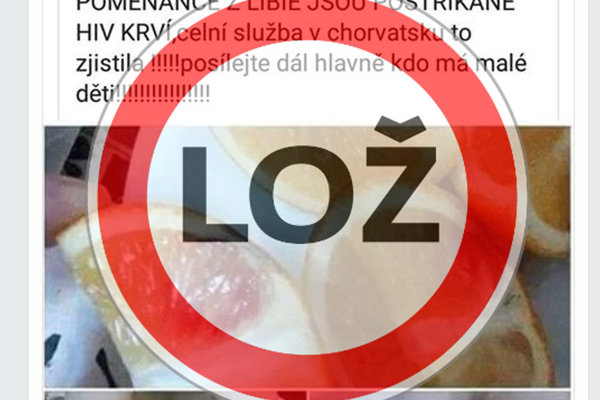 Several poor-quality shots of sliced oranges with red spots and a brief description stating they come from Libya were used to spread a popular rumour: the oranges were sprayed with blood infected with the HIV virus.

Croatian customs officers were said to have made this socking discovery, the Sme daily wrote recently. More then 8,000 people on Facebook shared the fake information that has been spreading for at least three years. In August 2017, the antipropaganda.sk website was already writing about the hoax.

The Czech version of the hoax has been spreading since at least spring 2016. The current version of the hoax is probably identical to the one Antipropaganda noticed: it's in the Czech language, and both versions contain the same typo – instead of “pomeranče“ (oranges), it reads “pomenanče“. In 2016, more than 16,000 people shared this status.

HIV does not spread through food

The English version has been spread since February 2015, and was analysed by the snopes.com website. The server reminded readers that even if someone really injected the HIV virus into oranges, one cannot get infected in this way.

“Except for rare cases when children ate a meal previously chewed by an HIV-infected person, this virus cannot spread via meals,” Snopes writes. The virus cannot live for long outside of the human body nor survive cooking or exposure to stomach acids.

Sometimes there is no bad intention or efforts to impact public opinion behind a hoax: from time to time, a mere joke morphs into hoax that isn't too amusing.

Recently, Czech social media has been flooded by the news that Prague will lose one of its most famous monuments. The popular Charles’ Bridge is allegedly damaged beyond repair, and thus, it has to be demolished. Instead, a modern replica will be built.

This is not the case, however.

A man named Martin Topič created a paste-up that looks like an article from the Czech website iDnes concerning the end of a famous monument. The article states that the walls, thought to be 700 years old, cannot be renovated anymore, and the city has to get rid of the bridge. It claims the European Union ordered the bridge's demolition as it does not fulfill EU standards anymore, and this news has to be shared.

The author intended this as a joke, targeting fans of such hoaxes and fake news by sending it to several groups in which they meet. In fact, he only misrepresented the original news about the demolition of the Výtoň Bridge, according to the Manipulátoři.cz website.

The Výtoň Bridge is the Prague railway bridge that has so many problems it doesn't make sense to repair it, according to Czech railways. As it is protected by the Monuments Board, however, it could be replaced by an exact replica.

But hoax enthusiasts did not bother to check on anything, resulting not only in rude and enraged comments but also the spread of news that was originally meant as a mere joke.

Is there any lesson to learn? Hardly, if you know how embarrassing it is to explain the meaning of jokes, Sme wrote.

Monaco is not Marrakesh

The first website to share this hoax was the Czech disinformation website Parlamentní Listy, according to Czech TV. On May 7, it published a story headlined “Africans to Europe, Babiš’ minister signed in Africa. Hungary: this will change the population of Europe, let us not sign it”. The story spread en mass across Facebook, while other Czech and Slovak websites immediately grasped the issue. “An avalanche of migrants from Africa is being prepared, supported by the legislation on the European and national levels,” the Slobodný Výber website wrote one day later.

Slovak politicians use the hoax

For example, the Supreme Court Justice and potential presidential candidate, Štefan Harabin, recorded a video in which he said that 150 to 200 million Africans will arrive in Europe.

“This is a fatal threat to citizens of Slovakia, and an existential threat to our sovereign state,” he noted for the video, which has more than 40,000 clicks. “Do our families want to have children raped, do we want to have window shops broken and zones where even police do not dare to enter?” he asks.

The Facebook site Zdrojj then published a picture where duties allegedly steaming from the Marrakesh Declaration are listed, garnering around 300,000 shares in two days. This is the third most successful disinformation news in the whole week, according to the blbec.online project.

The extreme right ĽSNS party also joined in, according to Denník N. Its MP Natália Grausová described at a parliamentary session in mid-May how Slovakia would be obliged to accept Africans and pay for their accommodation, paired with €800 in pocket money and other benefits.

The state tried to officially disprove these rumours through repeated explanations by the Foreign Ministry. The Facebook site for the police joined in, calling it nonsense and an “absolute hoax”.

The Foreign Ministry’s state secretary Ivan Korčok warned of the hoax through a special status on his Facebook profile.

The Marrakesh Declaration can be read in English on the European Commission websites. It was created as part of the so-called Rabat process, a long-term dialogue of European and African countries on solutions in the sphere of migration.

What is the Marrakesh Declaration?

The latest conference concerning the declaration took place in Marrakesh, Morocco, and one of the participants was Czech Interior Minister Lubomír Metnar; on the Slovak side, nobody participated. Moreover, none of the Slovak ministers even formally signed it. Slovak diplomacy joined the declaration with the Slovak ambassador to Brussels expressing his support remotely.

The working agreement does not mention anything about Slovakia being forced to accept Africans.

The Marrakesh Declaration is not an international contract obliging Slovakia to anything. It is a mere political declaration which is legally non-binding, according to Denník N.