Threats, scandals, and dubious political ties. Who is Marian Kočner?

The businessman with many ties to politicians has been detained by police. 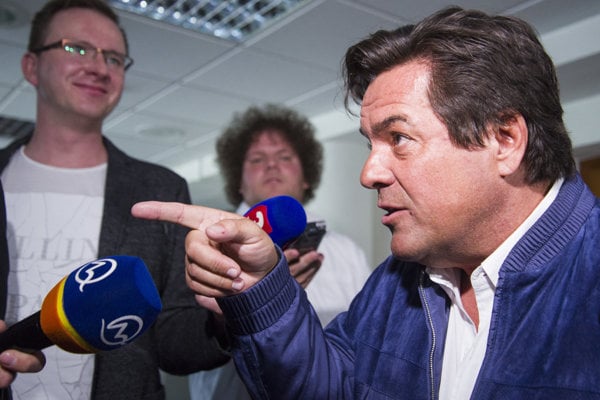 He has never been officially involved in politics but his name is connected with more cases and scandals than any politician in Slovakia.

Although for a long time it seemed police did not have anything to prosecute him with, Marian Kočner was detained on June 19 for the scandal involving promissory notes, and for tax crimes.

“Currently, steps are being made in the case and thus, we will not comment on the issue,” spokesperson of the Special Prosecutor’s Office, Jana Tökölyová, told Sme.

The “promissory notes” case surfaced in the beginning of May when Kočner started collecting from TV Markíza promissory notes worth €43 million euros, allegedly issued by former CEO of the private TV broadcaster, Pavol Rusko, in 2000. TV Markíza’s lawyers consider the notes to be forged and they filed a criminal complaint involving Rusko and Kočner.

Besides scandals, Kočner is also notorious for his aggressive behaviour towards journalists who asked him about the cases. In the past, he threatened the murdered reporter, Ján Kuciak.

“I will start showing interest, Mr. Kuciak, in your mother, your father, your siblings, I will show concern in all of them, and I will publish everything I find on you, Mr. Kuciak. You will be the first one, I will even prefer you to Mrs. Tódová,” Kočner told Kuciak.

Recently, he asked questions about the private and intimate life of Sme reporter Adam Valček. Some of the information he asked about concerned his family and his health condition, which is not available from open sources.

“Don’t take Markíza from us!“ the angry crowd chanted 19 years ago in front of the TV’s headquarters in Záhorská Bystrica. The revolution lasting several days, with the aim of showing support for TV Markíza, started after the Gamatex scandal on September 15, 1998- a mere 10 days before the general election.

At that moment, the acquaintance of TV Markíza’s CEO Pavol Rusko, Marian Kočner, took his chair in his office as the co-owner of the Gamatex company. The two former classmates were rivals in the dispute involving the new commercial TV. The Gamatex company co-owned by Kočner and Štefan Ágh became the owner of Markíza thanks to Rusko’s unsettled claim.

Recently, the case was revived when Kočner turned up with promissory notes worth dozens of millions of euros and started collecting them from Markíza. The TV is now owned by foreign company, CME. Markíza deems the promissory notes forged, but Rusko told the court he really signed them, and has no money to repay them. TV Markíza’s lawyer, Tomáš Kamenec, expressed his suspicion at the hearing that this case has been pre-arranged as a fraud by Kočner and Rusko.

“Normally, the defendant (i.e. Rusko) doesn’t behave like he would accept the claim in its whole extent, and he had tried to support in the course of evidence in every possible way of the plaintiff who applies his title,” Kamenec said.

These promissory notes are one of the reasons why police detained Kočner. His lawyer Martin Pohovej could not comment, so far, on the detention. “Currently, I am going to study the file and learn about the charge and the reasons for detention.” Pohovej told Sme. He could not say whether Kočner has testified even without him. He said he would reveal more after he studies the file.

After Kočner’s detention, Pavol Rusko went to police to receive the charge involving alleged forgery of promissory notes. He still insists the notes are authentic.

Another company that has been connected with the scandals surrounding Kočner for many years is Technopol.

Last year, the murdered journalist Ján Kuciak pointed out that that the assets of this famous Bratislava-based firm, worth €20 million, ended up under suspicious circumstances in the hands of people close to Marian Kočner. The Trend weekly and the Sme daily found out several weeks ago that shortly after the hostile takeover, Technopol paid half a million euros to Kočner’s personal account. The case has been long investigated by police, and several people have been accused.

Kočner did not answer the questions of several journalists concerning Technopol.

"I personally deem it absolutely useless to ask him anything as it is completely unconstructive. He does not answer to the point, and he, on principle, never comments on specific issues. He does not explain anything, only attacks. Of course, I keep asking him but it is only a formality,” Trend reporter Zuzana Petková said in an interview.

Kočner was involved, together with Michal Kováč junior (the son of then-president) and Martin Syčo-Milý, in another scandal involving Technopol back in 1992. This was the reason why Kováč Jr. was abducted and taken to Austria by the secret service. Then-president Michal Kováč Sr. granted amnesty to all three of them, due to the mistrust in investigation in the era of prime minister Vladimír Mečiar (HZDS).

Businessman Marian Kočner also appeared on so-called mafia lists, which were leaked from the police in 2005. In the first list, he was included in the Sýkorovci gang; in the second, the Piťovci gang.