Another For a Decent Slovakia protest was also joined by farmers

People took to the streets for the eighth time. 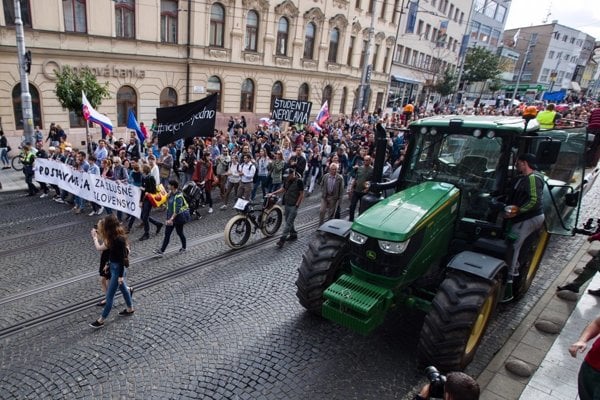 Another round of protests took place around Slovakia on Friday, June 22. In Bratislava, the protest gathering attracted thousands of people and was also joined by farmers, who staged a protest tractor drive to the capital earlier in the week.

In Bratislava, protesters met in front of the Government's Office and marched under the For a Decent Slovakia banner down to the SNP Square. The Bratislava municipal police estimated the number of protesters at the early stages of the march at around 2,000, the Sme daily reported.

On their way to the SNP Square, the protesters stopped near the place where Henry Acorda, the Filipino expat who lived in Slovakia, was brutally beaten one month ago. He later died of his injuries. The protesters held a minute of silence at the place of the attack. 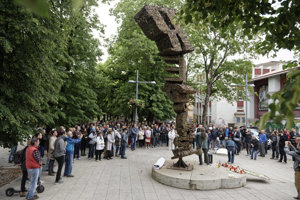 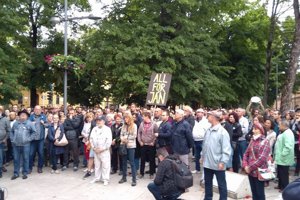 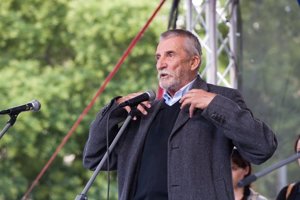 Speakers addressed the crowd of an estimated 7,000 people at the SNP Square. The protest organisers, Karolína Farská and Juraj Šeliga, criticised the appointment of Denisa Saková as interior minister and Milan Lučanský as Police Corps president.

"We are meeting here for the eighth time today, and in the past four months we have shown unprecedented strength," Šeliga told the crowd, as quoted by the Sme daily.

Actress Petra Polnišová came on stage to read the letter of the sister of the murdered journalist, Ján Kuciak.

"The only thing we can do now is to talk about it and keep reminding people of it," the letter, which was also read at the protest in Košice, reads.

"If the new prime minister and his government took their role seriously, they wouldn't need 100 days to send people like Marián Kočner behind bars," she said, adding that they also wouldn't have to watch the best people leave the public-service broadcaster, and farmers would not have to come to protest to the capital in the midst of the high season.

Famers say their protest was a success

"We're here with you," the protesters chanted as farmers took to the stage in Bratislava. In their address, they thanked people for their support.

"Our protest was successful, we have signed a memorandum," they said. "But we will continue watching the steps of the government."

The memorandum mentions 11 concrete tasks with deadlines for when they are to be fulfilled, including the creation of what they call an Agriculture Cobra, a special unit to deal with crimes in agriculture. Other tasks involve the passing of a new set of laws about land, changes in the way the Agricultural Paying Agency evaluates projects, and a law on the creation of a public central register of rental contracts.

The politicians who signed the contract pledged to propose the memorandum in the parliament by the end of September.

"We must go back to the harvest now, but if MPs fail to sign the memorandum in September, we will be back and there'll be many more of us," they said.

Thank you for singing up. Shortly an email will be sent to the address you provided to verify your e-mail.
Error! Please try to register again later, your e-mail was not registered.
Your email is not in a correct format.
Please confirm you are not a robot.
Share on Facebook (70)