District mining office originally halted the exploration and preparations for gold mining in the central-Slovak town. Then the Environment Ministry’s ruling granting a mining license to the company evoked protests, including a road block. 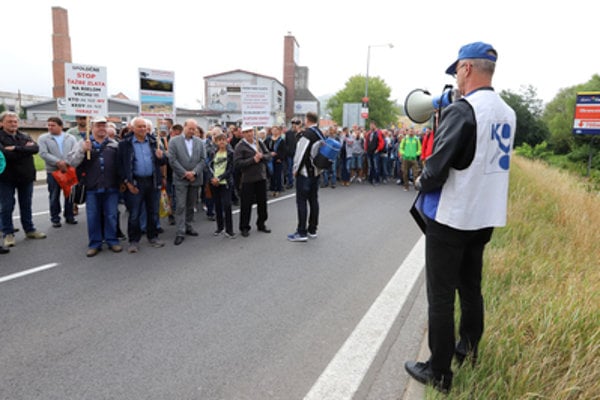 Almost 200 people blocked a state road in Detva (a town in the Banská Bystrica Region) for 40 minutes on June 26 morning to protest against the Environment Ministry’s decision to designate a mining exploration area for a geological survey for Stupava-based company Mining Gold, the TASR newswire wrote.

The firm is the legal successor of the original applicant to designate a gold mining area in the Detva-Biely vrch locality, a company called Eastern Mediterranean Resources-Slovakia (EMED Slovakia). Following protests by Detva residents a year ago, authorities chose not to issue a decision on designating the mining area for the company.

The Mining Gold company filed a complaint on September 6, 2017, against the Banská Bystrica District Mining Office’s decision to halt the proceedings; and based on the decision issued by the Environment Ministry became a holder of an extensive exploration area in Detva for four years in 2018.

“We met at this place 15 years ago to save the jobs of the employees of the PPS Detva engineering company that went bankrupt,” said Stanislav Lupták, boss of the local PPS company’s trade union. “We are standing here today again to express our disagreement with the state’s decisions that might significantly damage this beautiful locality,” Lupták added, as quoted by TASR.

Detva mayor Ján Šufliarsky presented his disapproving stance for the protest participants. PPS Group director Michal Sýkora appeared among the protesters as well. The PPS Group’s premises are located in a place where the exploration area has been earmarked.

After the road block…

After the end of the protest rally, its participants set out on buses to Stupava (Bratislava Region) where Mining Gold is based to be joined by their supporters from the Záhorie locality in the afternoon.

On their way to Stupava, the protesters stopped in Bratislava to hand over their open letter to Environment Minister László Solymos. In the letter they ask for the legislation to be adjusted so that local governments and land owners are notified when decisions on designating exploration areas are issued.