Despite playing an important role in the history of Slovakia, some historians have suggested very little was preserved from their work on the Slovak territory. 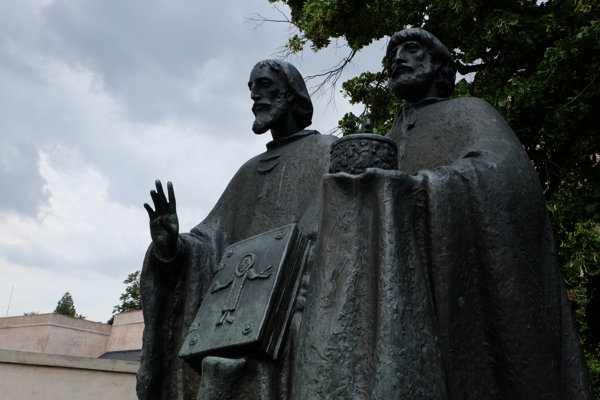 At school, most Slovak students learn the story of Constantine (later Cyril) and Methodius, two brothers from Greece who came to what is now known as Slovakia to spread Christianity.

Each year, the city of Nitra, alongside the Diocese of Nitra, organises traditional celebrations, including Nitra, milá Nitra and the Cyril-Methodius Pilgrimage. The heritage of Constantine and Methodius is also referenced in the preamble to the Slovak Constitution. Moreover, Pope John Paul II underlined the legacy of the two brothers of consequence when he proclaimed them co-patron saints of Europe.

Despite playing an important role in the history of Slovakia, the truth is the brothers and their story was rehabilitated only in the 19th century during the formation of the Slovak nation. Some historians have suggested very little was preserved from their work on the territory, which later adopted Western rather than Eastern Orthodox Christianity.

“Despite having arrived from the Byzantine Empire, their diplomatic action in relation to Rome strengthened our cultural orientation towards the Latin tradition,” said archaeologist Vladimír Turčan from the Slovak National Museum (SNM).

However, the brothers were lucky enough to have disciples and followers who recorded the events they were involved in, which occurred during that time in Great Moravia, since no records have been found in Byzantine sources.

“Otherwise, we would have little idea of what was happening there,” added Turčan.

Constantine and Methodius came to Great Moravia by invitation from the ruler Rastislav, who originally asked for a missionary from Pope Nicholas I, head of the Roman Catholic Church. The demand was unsuccessful for political reasons. Rastislav, therefore, requested a bishop from Michael III, the Byzantine emperor under the influence of the Patriarch of the Orthodox Church. The emperor sent him just two brothers, Constantine and Methodius.