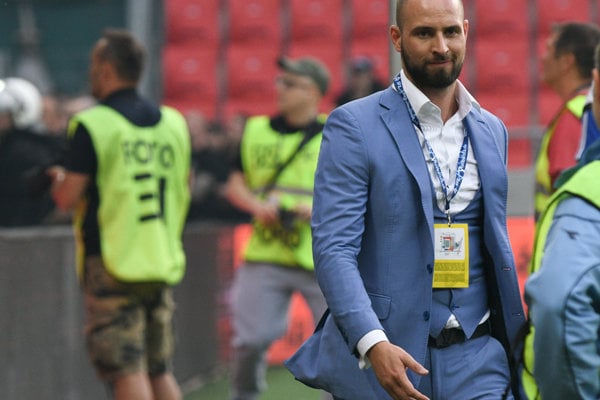 After an emotional football match between Slovan Bratislava and MFK Ružomberok, which ended Slovakia’s first league 2017/2018 season, Slovan’s vice president Ivan Kmotrík ran onto the pitch to greet the Slovan fans. Instead of enjoying Slovan’s victory in a standard manner he raised his right hand, which strongly resembled a Nazi salute and seemingly shouted "Heil Hitler".

The disciplinary commission of Slovak Football Association (SFZ) fined him €10,000 for violating the ethical codes of football, for discrimination, extremism and profanity. Moreover, the Slovak police charged him with extremism which, may lead from a jail sentence of six months to three years.

Ivan Kmotrík is the son of Ivan Kmotrík, Sr., an influential businessman with ties to Smer and the Slovak National Party.

“Of course, this does not make me happy,” Kmotrík, Sr. told the sport news website sport.sk. “What else I can say?”

After the SFZ fined Kmotrík, Jr., some observers pointed out that he may avoid court because law the bans punishing a person twice for the same deed.

Slovak football has been dealing with extremism for years and even foreign athletes playing on Slovak teams experience hate.

Kmotrík, Jr. says that he was just greeting fans and did not use the Nazi salute.

He has a long list of breaking rules and unethical behaviour at football stadiums.