Souvenir banknotes have become a collectors’ phenomenon in Slovakia. 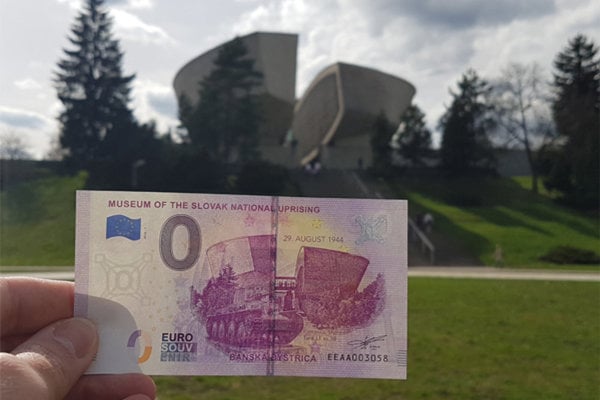 The souvenir banknote with the SNP Monument in the background. (Source: Courtesy of Nunofi.sk)
Font size:A-|A+  Comments disabled

Even though the nominal value of the souvenir euro banknote bearing the motif of the Slovak National Uprising was zero, people queued for hours to get their own copy. A total of 3,000 souvenir banknotes, featuring the SNP Memorial with a tank fighting in the uprising, were sold out in the record time of two hours and 15 minutes. The enormous interest surprised Vladislav Klajban, executive director of the Nunofia company, which issues the souvenir banknotes in Slovakia. He does not know of any similar demand in any other country and sees it as the beginning of a new collectors’ phenomenon in the country.

The Slovak Spectator spoke with Klajban about the idea of issuing souvenir banknotes known as Euro Zeros and how it works, as well as plans for the future. 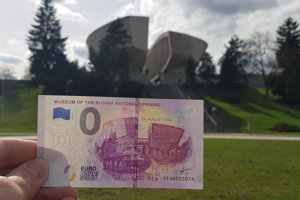 The Slovak Spectator (TSS): When and where did you encounter this kind of souvenir the first time?

Vladislav Klajban (VK): We came across this concept at a collectors’ fair in Germany some years ago. Frenchmen were selling Zero Euros depicting various national monuments like the Eiffel Tower and castles. We were enthusiastic over their artistic design and the fact that they were, in terms of quality, identical to genuine euro banknotes. But contrary to classical nominal values, they featured a big zero. We bought some of them and offered them to collectors in Slovakia and they were interested.

TSS: How did the idea of issuing Slovak Zero Euros come about?

The Zero Euro is a souvenir banknote with authorised printing by the European Central Bank (ECB) on real euro banknote paper. The father of the concept is Richard Faille, creator of popular French currency souvenirs, who in 2015 decided to create euro banknotes promoting tourism. The banknotes share many of the same characteristics of a real euro banknote except that they are marked as “0”, i.e. their nominal value is zero. The front of all Zero Euro banknotes is the same. The reverse features the chosen motif.

VK: At the fair we had already learned that they serve as a souvenir visitors can buy when visiting a particular monument or a tourist locality and that we can issue our own with Slovak castles and other monuments. This idea enthused us. We contacted the father of this concept, Richard Faille, and he agreed to cooperate with us in issuing the Zero Euros with Slovak motifs.

TSS: How does it work?

VK: We either address interesting tourist locales, or organisations that are interested in having such a souvenir contact us themselves. They tell us their idea for the motif and deliver the images and the text that are to feature on the Zero Euro. We prepare the design, the final appearance of which is then agreed with the sponsor.

TSS: How many Slovak euro souvenirs have you issued so far?

VK: So far this year we have issued eleven motifs including the castles of Bratislava, Červený Kameň and Orava, the St Elisabeth Cathedral in Košice as well as the zoos in Bratislava and Košice. 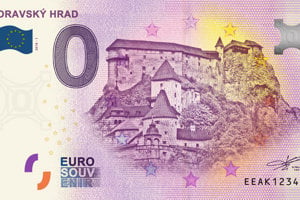 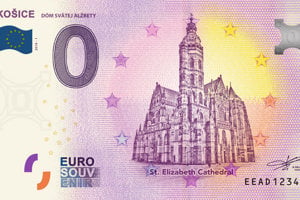 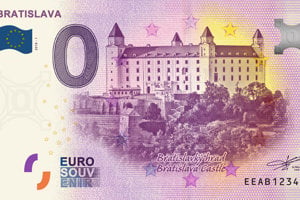 TSS: How many other motifs do you plan to issue this year?

VK: The final number will depend on the interest of individual sponsors in having their own euro souvenir. For the time being we are working on about 10 more motifs while new orders are still arriving. Currently almost every town, each museum, each castle and each interesting tourist locality wants to have its own euro souvenir.

On the occasion of the 50th anniversary of the invasion by the Warsaw troops of the former Czechoslovakia we will also issue a euro souvenir with the iconic photo “The Bare-chested Man in Front of the Occupiers Tank” by Ladislav Bielik. 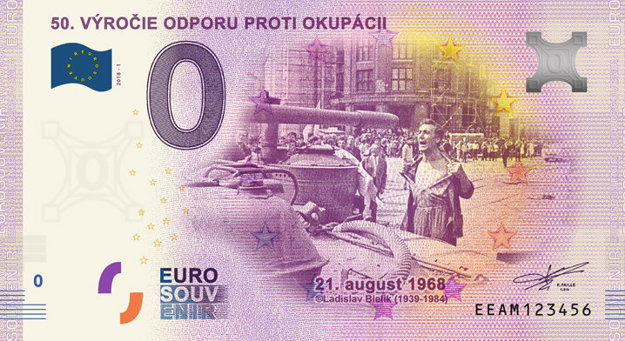 Zero Euro with the iconic photo “The Bare-chested Man in Front of the Occupiers Tank” by Ladislav Bielik. (Source: Courtesy of Nunofi.sk)
You have just exceeded the number of devices allowed.
Your active subscription only allows a limited number of browsers to access locked content.
To continue reading this article on this device/browser, please edit the list of registered devices in your profile settings here:
manage devices
You can read all about device management here.