Presidents of the Slovak and Czech Republics will take a train ride to mark the founding of the Czechoslovak State. 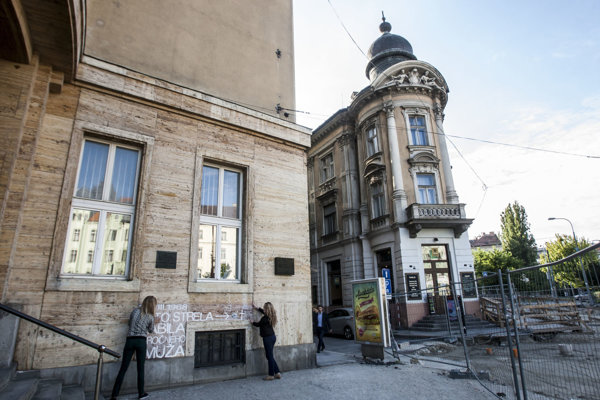 Law Faculty of Comenius University in Šafárikovo Square, where the civilian killings by foreign armies on August 21, 1968, were most concentrated. (Source: Sme - Gabriel Kuchta)
Font size:A-|A+9

On the night of August 21, 1968, the armies of the Warsaw Pact countries invaded the then-communist Czechoslovakia and on the first day of the occupation, murdered 15-year old student Danka Košanová, Stanislav Sivák and ship captain Ján Holík, in Šafárikovo Square in downtown Bratislava. Overall, the occupying armies claimed more than 100 victims.

In August, 50 years will have passed since the invasion, but the Slovak state institutions do not plan any special, reverential commemoration on this anniversary.

The Prague Spring is the period from the end of 1967 until the arrival of the Warsaw Pact armies on August 21, 1968. This period saw the gradual release of political tensions. The first secretary of the Central Committee of the Communist Party of Czechoslovakia, Alexander Dubček, tried to reform communism – under public pressure – but then-Soviet leader Leonid Brezhnev saw in it a possible weakening of the communist block. This resulted in the occupation of the territory of then-Czechoslovakia. The data of the Nation’s Memory Institute implies that the force of the invading armies consisted of 27 divisions, 500,000 soldiers. Due to the occupiers’ actions, at least 108 Czechoslovak inhabitants died; of this number 37 were in Slovakia.

The Nation’s Memory Institute (ÚPN) has organized one for August 21 but it stresses there will be no politicians in attendance.

“This shows that the historical awareness of our society is distorted,” says historian Dušan Kováč.

He believes that politicians neglect fundamental historical events but pay excessive attention to events such as the 26th anniversary of the Declaration of the Slovak Republic’s Sovereignty which the historian deems an “empty, neutral document and part of (Vladimír) Mečiar’s games”. On that day, the Chairman of the ruling Smer party and ex-prime minister Robert Fico called July 17 “a great day for Slovak men and women”.

Last year, he called the state holiday celebrating Ss Cyril and Methodius the most important one for Slovakia. While the Government Office then eagerly arranged for a nation-wide celebration at Devín, no such commemorative event is going to be organised for the half-centenary of the occupation.

Even Prime Minister Peter Pellegrini of Smer has not so far disclosed whether he will commemorate the anniversary in any special way.

Dubček should be revered

Last year, the Slovak Cabinet – then led by Fico – approved documents detailing the organisation of events to be held on the occasion of this year’s big jubilees that Slovakia commemorates together with Czechia.

The column entitled “50th anniversary of the Czecho-Slovak renewal process” describes it as a chance to pay tribute to Alexander Dubček’s political message.

Fico holds up Dubček as his political example. Smer also referred to him in one of its programme documents called “Politics with a Human face”. However, the government's material does not mention the country’s occupation by foreign armies.