The popularity of outdoor cinemas is increasing in Bratislava 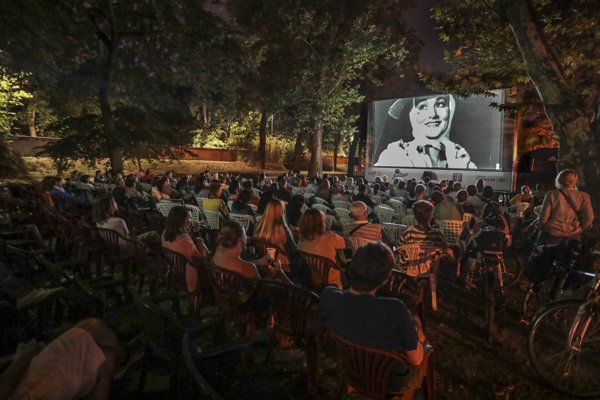 In Slovakia, summer cinemas experienced their greatest glory during the former communist regime. At that time, there was at least one open-air cinema in almost every city. After the fall of the regime in 1989, however, air-conditioned multiplexes with comfortable seats and popcorn came in and many summer cinemas disappeared. In the last few years people have begun to once again enjoy watching movies under a starry sky and summer cinemas have returned to life. In Bratislava alone there are more than 10 outdoor cinemas in operation this summer. All screen for free and some of them even provide blankets and bug repellents to make the experience better.

“We achieved a record audience last year when about 2,000 people came to see the Slovak film Kidnapping at Kuchajda’s summer cinema,” said Marek Tettinger, spokesperson of the Bratislava borough of Nové Mesto, which operates the cinema. “It also happened that when it was raining, people came in raincoats.”

There are other outdoor cinemas in Ružinov, in the Líščie Údolie valley as well as in Rača, while almost all of them report an increasing interest in screenings.

Cinema on the beach

The Bažant Kinematograf road cinema settled on Magio beach on the Petržalka bank of the Danube this summer for the eighth year already. Films are screened here each evening from Saturday until Wednesday while the focus is on the latest films and legendary cinema. Part of the programme are meetings with filmmakers. 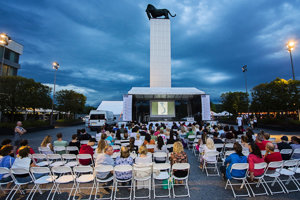 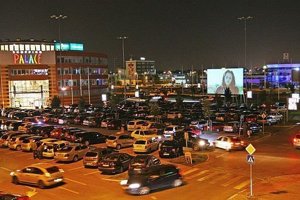 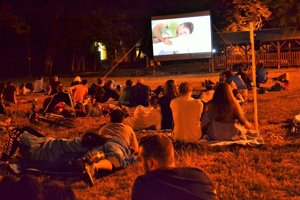 Foreign films are screened in the original language with Slovak or Czech subtitles. For example, filmgoers can see the legendary Yellow Submarine with music by the Beatles on July 21, Paddington 2 on July 25, The Death of Stalin on August 4, or T2 Trainspotting on August 12. Slovak films include Mečiar on August 13, The Line (Čiara) on July 23 and the Czech movie Tátova volha (Patrimonyon) on August 6. Moulin Rouge, an American jukebox musical romantic comedy film featuring Nicole Kidman and Ewan McGregor, will close the screening on the beach on August 17.

In general summer cinema programmes are usually composed of the latest successful movies, as well as musical and cult films. Very popular are fairy tales and animated films since entire families can come and enjoy them. In two summer cinemas - in Nové Mesto (the area of Kuchajda lake) and Ružinov (the area of Štrkovec lake) - visitors themselves decide on the film to be screened by voting on the internet.

In the outdoor cinema in the Líštie Údolie valley operated by the Karlova Ves local council, they prefer Czech and Slovak cinema.

What to take with you

Visitors should not forget that wooden benches in outdoor cinemas are considerably harder than upholstered chairs in multiplexes. Therefore, it is advisable to take a blanket to sit on. Visitors should also consider that even in the summer temperatures might decrease in the evening and should take another blanket or sweater. They should additionally consider that when watching movies outside they may be annoyed by mosquitoes and should take a repellent with them.

Nevertheless, the operators of outdoor cinemas are constantly expanding their services and often provide blankets and repellents on the spot. Some cinemas offer popcorn, other refreshments and drinks for sale. In the amphitheatre in Rača, they even added a stand offering local wines this year.

Some outdoor cinemas in Bratislava:

Where: Magio pláž beach on the Petržalska side of the Danube River next to Janko Kráľ Park

Screening: from Saturday until Wednesday, the screening starts at 21:00 or soon after dark. The last screening will take place on August 17.

More info: www.kinematograf.sk (only in Slovak)

Where: the amphitheatre in Knižkova Dolina valley

More info: at the website www.raca.sk and the FB site of Letné kino Rača (only in Slovak)

Where: the parking lot in front of the Zlaté Piesky Shopping Palace

Screening: each Friday and Saturday at 21:30. The last screening will take place on September 15.

More info: www.autokinoshoppingpalace.sk (only in Slovak)

Screening: each Tuesday at 21:00. The last screening will take place on August 28

More info: at the FB site of Letné kino v Ružinove 2018 or cultusruzinov.sk (only in Slovak)

More info: at the FB site of Filmové leto v Líščom údolí (only in Slovak)

Where: the amphitheatre next to Kuchajda lake

Screening: on Wednesday and Sunday; in July at 21:30 and in August at 21:00. The last screening will take place on September 5.

More info: at FB site of Kino na Kuchajde and website kino.nakuchajde.sk (only in Slovak)

Screening: the season will start with the screening of the film Wall-E on July 24 at 20:30. The screening day will be Tuesday, in one- or two-week intervals.

More info: at the FB site of the organisation OZ Hrad-Slavín (only in Slovak)

Screening: screenings are devoted to individual countries like those in Africa, Uzbekistan or Iran on selected Wednesdays at 20:30, (July 25, August 1, 8 and 22)

More info: the FB website of the travel agency CK Svet (only in Slovak)