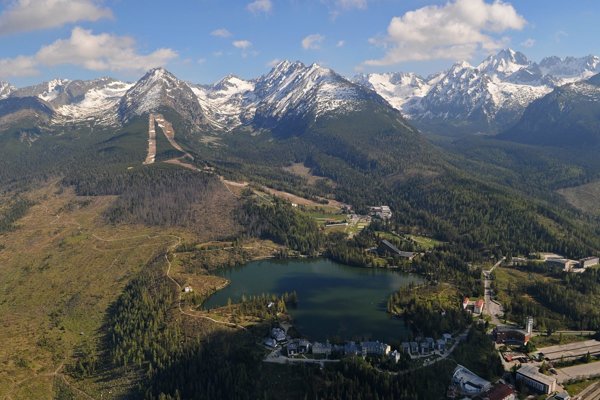 This project means intervention in strictly protected areas, in the Tatra National Park and within the park in the nature reserves of Mlynická Dolina and Furkotská Dolina valleys.

The company argues that the project would bring, among other things, a reduction in traffic intensity and the concentration of parking to a central parking area, as well as better connection to train or bus transport.

Optimising the existing ski resorts skiing possibilities due to the rising rate of visitors and intensifying transport are the main arguments by Peter Tomko of the 1. Tatranská, Spiš Korzár wrote. He added that according to their idea, visitors would use much more public transport, since ski lifts and cableways would be better connected to trains and buses.

Tomko summed up that tourism and winter sports were present at Štrbské Pleso long before it became a protected area.

The village of Štrba needed to amend its master plan, since the current one does not include any such possibility. Negotiations lasting since last year have shown that the proposed project will considerably ease the transport, preventing vehicles from crossing the whole resort of Štrbské Pleso, mayor of Štrba, Michal Sýkora, noted, adding that his municipality supports this idea and has already approved the changes in the master plan that would enable the construction.

The mayor stressed that Štrbské Pleso needs such a project, as none of the calls for subsidies from EU funds or other similar resources has dealt with investments into infrastructure.

“The benefit of this investment would also be good for the environment,” Sýkora argued, as quoted by Spiš Korzár. “Mainly the number of tourists’ cars coming for skiing and hiking all the way to the mouth of Mlynická Dolina valley would be reduced. The vehicles would remain at the central parking area from where skiers would be transported by ski-lift to the slope. There is no other alternative than this.”

Environmentalists are against it

However, the conservationists of the Tatra National Park Administration have protested against the idea, arguing that new ski slopes would mean more logging in protected areas. The only sensible option, according to them, is to enhance the existing ski-slopes.

Moreover, the already existing ski facilities should be connected to the new ones, and to the main parking areas and transport infrastructure at Štrbské Pleso. These plans would require vast interventions in the landscape – thus causing impacts on the fauna and flora living there – which enjoys the highest level of environmental protection, including wood logging, changing the flow of the Mlynica river and major land adjustments.

Conservationists have not recommended the changes, arguing that “the extent of environmental damage would be big, since new tracks and routes are to be built in the future as well”, Pavol Majko of the Tatra National Park (TANAP) Administration said, adding that if only the expansion of the current slopes and routes was involved, the situation would be different.

What is planned for the Tatras?

The project suggests that 1. Tatranská plans to build new ski slopes on eastern mouth of the Mlynická Dolina, at the Trigan elevation in the Patri a range – where they have never been in the past. Two ski-slopes should be made here, Helios a Mlynica, as well as two new ski-lifts. The company also plans to build two water reservoirs for creating artificial snow at the foot of Patria.

A new ski slope in the Solisko resort is also planned. This slope, on the hillside of Furkotská Dolina, is to be called Krivánska.

The Optimising Mountain Transport Facilities and Transport at Štrbské Pleso foresees three new ski-lifts/cableways, new snow cannons, a new entrance point and the enhancing of the gastronomy services with a new koliba (restaurant in traditional shepherd style) Trigan. The capacity of new ski-lifts/cableways would be 6,000 people an hour. The expected costs are more than €25 million, Spiš Korzár wrote.