How does it feel to belong to a minority in Slovakia?

People representing old and new minorities shared their experiences with their changing identities and life with the majority. 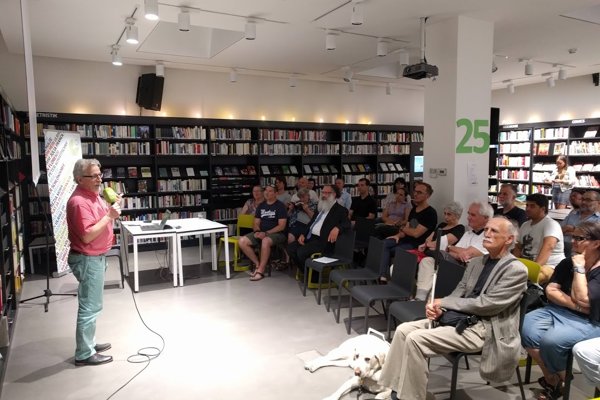 Philosopher Fedor Gál lived 50 years without actually realising he belongs to a minority. He knew he was a Jew, since he grew up in a village where he was part of the only Jewish family. But he adopted the philosophy that he was secular, not a Zionist, and speaks no other language than Slovak.

“I first realised I belong to a minority in 1990,” he said at the July 19 discussion held at the Goethe Institute in Bratislava under the title “What is it like to be a minority in Slovakia?”

What is it like to be a minority in Slovakia?

The discussion was part of the European Minorities project, running under Erasmus+. It was organised by the Jewish Educational Centre Chabad of Slovakia and the Goethe Institute in Bratislava.

Its main objective is to map the current status and situation of minorities in the project countries as part of the comparative study (based on the example of Jewish communities), prepare guidelines to improve and standardise their status in Europe, and show society, with the help of young people, that members of minorities are also people.

Gál recalls a colleague who was among the first to leave his workplace after 1989. One day, Gál went to work to find a note saying, “These Jews are responsible for my dismissal”. But none of the eight people listed were actually Jews.

He tried to explain to his colleague why his claim was not true, and they argued for about an hour, but with no result. The next day, the text changed. The word “Jews” was crossed and replaced with “Zionists”.

“This is when I realised there is something called an identity and for some people, ‘imaginary Jews’ is also a term,” Gál recalls, adding that for most of them it is “a smaller or bigger Soros”.

How can a Hungarian define himself?

Hungarians represent the biggest minority in Slovakia, making up 8.5 percent of inhabitants, according to the 2011 census.

“I could define myself very clearly: I was a Hungarian born in Šahy,” said psychologist Péter Hunčík, recalling his youth. The whole community was Hungarian, and they were proud to be part of the nation, he added.

But in August 1968, he started questioning his affiliation with the minority. Šahy is a town on the Slovak-Hungarian border and subsequently, one of the first Warsaw Pact troops came through. Hungarian soldiers were among them. They greeted the locals and explained they were there to liberate them, but the people from Šahy did not know how to respond. They asked them whom they came to set free, Hunčík recalls.

“That was the first time I received a blow to my identity,” he added.

Vlado Rafael, teacher and founder of EduRoma, pointed to the fact that it is sometimes hard to offer a new view in discussions when it comes to Roma. Based on unofficial statistics, the number of Roma in Slovakia exceeds 420,000.

“We have successfully passed the awakening period,” Rafael said, explaining that in the 1990s, the older Roma generation was calling for recognising their rights as a national minority. Now, the middle generation votes in elections, and Roma activists even appear on the slates of various political parties.

On the other hand, a solid group of Roma intellectuals is still missing.

“We perceive our activities mostly via social help to people who are still excluded,” Rafael admitted.

What are the benefits of migration?

Zuzana Palovic, a daughter of emigrants, who has spent most of her life abroad, talked mostly about the possibilities Slovaks were offered after the fall of the totalitarian regime. In her view, international migration is one thing needed to change the mindset of the people.

“Our young people should travel abroad, encounter new cultures and languages, and then return,” Palovic said. Slovaks, who live as members of the majority at home, can first experience how it feels to be a minority when they come to a foreign country, facing discrimination and xenophobia and other barriers.

This brings an opportunity for people to change their view on the world and themselves, and start perceiving foreign cultures, but also themselves, in a different light, Palovic said.