Slovak race walker Tóth: "Silver has the worth of gold for me" 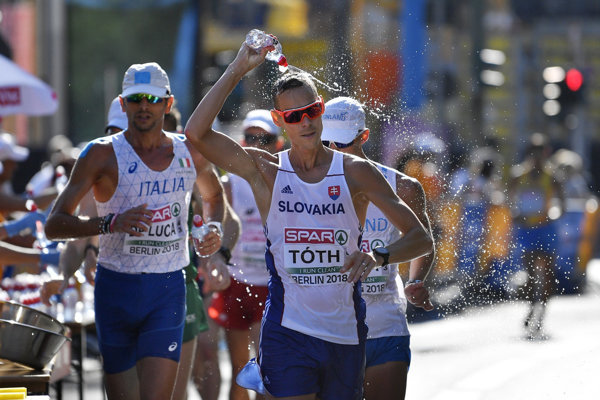 Slovak race walker Matej Tóth finished second in the 50-kilometre competition at the 24th European Athletics Championship in Berlin on August 7, less than one minute behind Maryan Zakalnytskyy from Ukraine, and half a minute ahead of Dimitry Dziubin from Belarus.

Tóth, aged 35 and a 2016 Olympic champion and 2014 European runner-up champion, led the field in the first 30 kilometres on a two-kilometre long city circuit in the German capital, before dropping to fourth later in the race, the TASR newswire wrote.

Nonetheless, by displaying remarkable effort in the final few kilometres, he managed to secure silver in the scorching heat in the streets of Berlin.

He finished in 3:47:27 hours, the Sme daily wrote, adding that he fell to his knees at the finish, totally exhausted, and immediately congratulated the surprising winner, Ukrainian Zakalnytskyy.

Although he did not achieve a race-walking hat-trick, he gave a great performance, earning European vice-champion for the second time in his life.

Tóth about his performance

“This silver has the worth of gold for me,” Tóth commented, as quoted by Sme. “I had emotions comparable to (the Olympics in) Rio.”

He also said that around the 40th kilometre, he was not interested in his place but rather felt like fighting for survival – “every cell wanted to give its everything on the track. These are unbelievable emotions,” he summed up, as cited by Sme.

Other Slovaks were successful, too

Tóth’s coach Matej Spišiak told Sme that his trainee made a great show and returned to the races (after a doping scandal) as a true champion. Spišiak added he was proud of all Slovak international racers.