Slovak celebrities and outstanding personages in art, culture, science and public life have called on politicians to act in the case of the Ukrainian director imprisoned by Russian authorities. 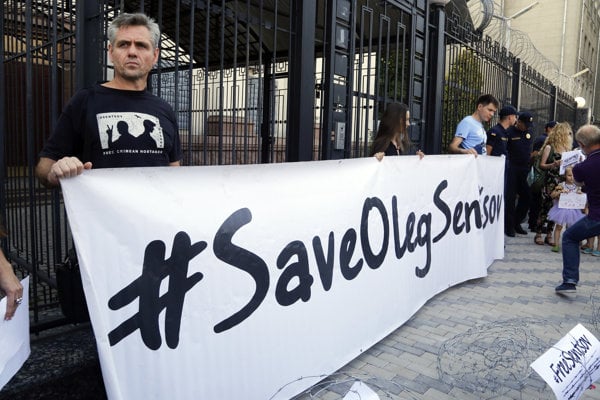 People hold posters to support Ukrainian filmmaker Oleg Sentsov, who is currently on hunger strike in a Russian jail to demand the release of the other Ukrainian hostages taken by the Kremlin, in front of the Embassy of the Russian Federation in Kiev on August 21, 2018. (Source: AP/TASR)
Font size:A-|A+  Comments disabled

Major Slovak personalities have called on politicians to act in the case of the Ukrainian director imprisoned by the Russian authorities and to stand clearly on the side of democratic values.

The newly formed platform, Slovensko a Česko za Olega Sencova / Slovakia and Czechia for Oleh Sentsov, launched the campaign #FreeOlegSentsov, which appeals to society to wake up from its indifference, on August 23.

“Just as in 1968 when the fate of occupied Czechoslovakia was decided, now, the life of Oleh Sentsov and other Ukrainian prisoners is being decided behind the thick walls of the Kremlin,” the platform’s supporter, political analyst Grigorij Mesežnikov said, as quoted by the TASR newswire.

Just as in 1968, when Czech and Slovak citizens became the victims of the power and wilfulness of an aggressive state, today the Russian leadership, headed by Vladimir Putin, is ready to sacrifice the life of Oleh Sentsov to its own interests – just because he does not agree with the Russian invasion, occupation and illegal annexation of the Crimea, Mesežnikov continued.

He likened the annexation of the Crimea to the occupation of Czechoslovakia in August 1968. 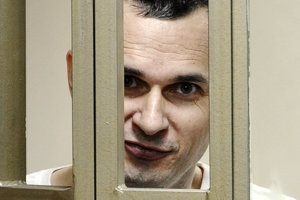 Read also: If Slovak celebrities raised their voices, we could help the dying director Read more

Members of the initiative point to the connection between August 21, 1968 and the recent politics of Russian President Vladimir Putin in an open letter to Slovak president Andrej Kiska, Foreign Minister Miroslav Lajčák and Speaker of Parliament Andrej Danko. The public can also sign it by going to the changenet.sk website.

The people involved with the initiative use short videos to point to fundamental human rights which are the values and priorities of democratic countries. They include film director Martin Šulík, Head of the Slovak Academy of Sciences (SAV) Pavol Šajgalík, actress Táňa Pauhofová and writer Michal Havran. More and more videos are appearing on the Youtube channel “Slovensko a Česko za Olega Sencova”.

“We founded the platform to create public awareness of the case of Oleh Sentsov and to highlight to Slovak and Czech citizens the connections between what is happening now with historical events,” one of the platform’s founders, Eva Križková, told TASR.

Kiska talks to Poroshenko about Sentsov

President Andrej Kiska made a phone call to Ukrianian President Petro Poroshenko, congratulating him on the state holiday of Ukrainian Independence Day on August 24, . Among other issues, Kiska was interested in the current situation concerning the imprisoned Ukrainian film director Sentsov, sentenced in the name of the Russian federation to 20 years for the alleged organisation of a terrorist group in the Crimea despite the fact that it is outside its territory.

Sentsov has been on hunger strike for more than 100 days asking not only for his own release but also for the release of other Ukrainians illegally held in Russian prisons.

Poroshenko informed his Slovak counterpart of the very bad health condition of Sentsov, at which the President expressed his concern.

Kiska confirmed for Porohsenko, as cited by TASR, the official stance of the Slovak Foreign Ministry, and the European Union, calling for the freedom of illegally imprisoned Ukrainian citizens. He also assured him that Slovakia considers the Crimea to be Ukrainian territory in its internationally acknowledged borders.