Presidential survey: Which candidates would stand a chance?

Scientist Robert Mistrík would have been elected president if the election had taken place on the break of August and September 2018. There are small differences among the candidates, though. 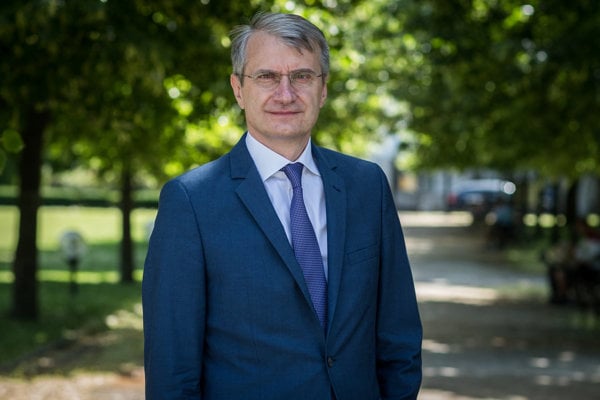 Before announcing his presidential bid, Robert Mistrík was unknown to the wider public. But currently, he has the most billboards around Slovakia and so far the biggest chance of becoming the new president.

If presidential election had taken place at the end of August and the beginning of September, he would have ended up first from among the presidential candidates, with 12.1 percent of votes, the results of the AKO poll exclusively given to the Sme daily suggest.

However, the differences between him and the candidates faring worse are very small.

Mistrík is supported in his candidacy by the opposition parties Freedom and Solidarity (SaS) and Spolu (Together) of Miroslav Beblavý.

Why is he leading the peloton?

Mistrík’s preferences are due to the massive billboard campaign, head of AKO, Václav Hřích, told Sme.

“He started relatively as the first one with a bigger campaign,” Hřích said, as quoted by Sme. “He managed to partially make people know he is here – running for president.”

However, Hřích does not consider the current results a success and Mistírk cannot be considered a favourite due to small differences between candidates. Moreover, a relatively small number of people know the scientist, compared to the other candidates, e.g. coalition Most-Híd chairman Béla Bugár or former justice minister and judicial official for HZDS Štefan Harabin, Hřích opines.

There are many favourites

The poll was conducted at a time when many key candidates are not known yet: the ruling Smer party has not officially announced its candidate yet, and the politicians mentioned in this context (Prime Minister Peter Pellegrini, Foreign Minister Miroslav Lajčák and Finance Minister Peter Kažimír) have rather denied rumours they would run than support them.

The other coalition party, Slovak National Party (SNS), has not come up with a candidate yet. Thus, AKO decided to include Pellegrini (who ended up second, with 11.9 percent) and SNS chairman Andrej Danko (9.7 percent) in the poll.

As for other relatively famous candidates, Harabin – who is close to conspiracy media – would also have a chance, with 8.8 percent of votes. Most-Híd’s Bugár would get 8.6 percent, ex-politician of the Christian Democratic Movement (KDH) and communist-time dissident František Mikloško 7.1 percent, and candidate of the new party Progresívne Slovensko (Progressive Slovakia), Zuzana Čaputová, 6.9 percent.

Hřích sees the small differences in the number of votes as stemming from the fact that for most people, the presidential election is not a key issue yet, nor a big priority – and thus, their decisions are rather motivated by the likings of party voters or fans (in independent candidates).

The big number of candidates – if preserved also in the real election – will threaten to split the possible support of voters of both the ruling coalition and opposition, according to the analyst.

“If this number is preserve in the actual election, it is possible that almost everyone of the first 8-10 candidates has the chance to proceed to the second round,” Hřích added, as quoted by Sme.

Kotleba has less than 5 percent

Other candidates who would get less than five percent include extreme right-winger Marian Kotleba, chair of the ĽSNS party (4.7 percent), chair of the opposition Ordinary People and Independent Personalities (OĽaNO) party, Igor Matovič, at the same percentage (another possible OĽaNO candidate may be MP Veronika Remišová), opposition Sme Rodina MP Milan Krajniak (4.4 percent).

Still others – former SIS agent and key witness in the abduction of president’s son Oskar Fegyveres, ex-head of official security guards from the times of Mečiar, Juraj Zábojník, head of the charity project Dobrá Novina, Milan Čaučík, (nominated by non-parliamentary KDH) – would garner around 1 percent of votes, Sme reported.

About 1,000 respondents participated in the poll, according to Sme. They were asked: Whom would you select if a presidential election took place this weekend? The names of the candidates were read to them in random order.