The Interpreter to vie for Oscar

A Slovak movie, which won an award at a San Francisco festival, was chosen to represent the country in the US Film Academy contest. Both main actors have already had experience with this prize. 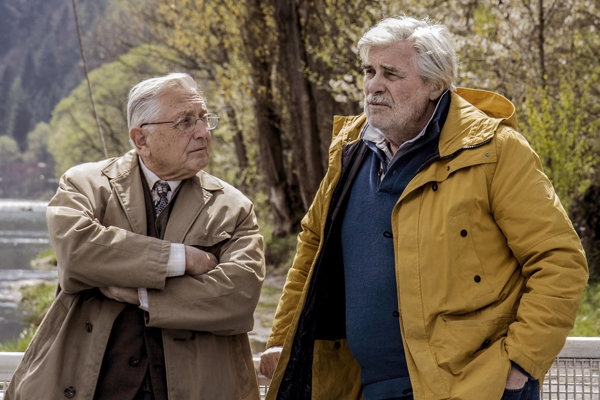 The Interpreter, a co-production of Slovak director Martin Šulík, won the Reviewers’ Award at the San Francisco Jewish Film Festival in the middle of the summer. This is the biggest overview of Jewish movies in the USA, with international representation, the Slovak Film Institute (SFÚ) wrote.

The movie, starring Czech director/scriptwriter/actor Jiří Menzel and German actor Peter Simonischek, premiered in Slovakia in March and tens of thousands of locals have already seen it.

The plot of this “special road movie” revolves around an ageing Slovak interpreter from Germany of Jewish origin (Jiří Menzel) who tries to find out more about the death of his parents during World War II by contacting the son of their suspected murderer, an Austrian officer (Peter Simonischek). The two men could not be more different and both show enormous reluctance to embark on a joint trip across Slovakia to dig into the past. During their time together, however, their relationship changes, as well as their views of the past, war crimes and sins, and purposeful ignorance of history by the modern country.

The Interpreter (2018) was selected by the Slovak Film and TV Academy (SFTVA) to represent the country as the national nominee for the “best foreign language film” category at the 2019 Academy Awards next February, the TASR newswire wrote.

Both key actors already have experience with this award: Menzel won the foreign-film Oscar in 1968, at a mere 29, as director of Closely Watched Trains (his first feature film) and was shortlisted among the “best five” again in 1986; while Simonischek attended the final Oscar ceremony in 2016 as the star of the German comedy Toni Erdmann, which was shortlisted for the top five.

The co-production was selected by the Slovak film academy to run for the Oscar from among 12 movies – both documentaries and feature films – which included, among others, the recently premiered pieces Dubček (directed by Laco Halama), Mečiar: The Lust for Power (Tereza Nvotová) and Intimate Enemy (Karel Janák).

The Interpreter had its international premiere at Berlinale in February and is slated to compete in the European Film Awards contest, SFTVA informed TASR.