He fears that without proper checks and balances the Constitutional Court will be under the control of Parliament. 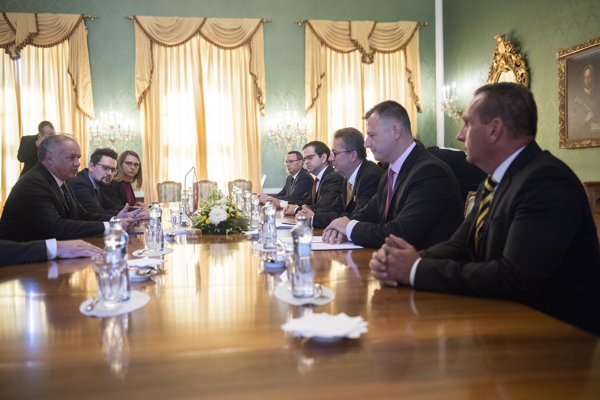 President Andrej Kiska perceives the plans of the ruling party Smer to make the election of Constitutional Court judges an exclusive right of Parliament alone to be dangerous and wonders about its true purpose.

After Kiska met with representatives of coalition parties earlier in the day, he accentuated that a proper system of checks and balances guarantees that power won’t be concentrated in a single set of hands and that the Constitutional Court won’t have to serve the interests of the current parliamentary majority. Kiska also added that he perceives no insurmountable obstacles that would hinder the coalition and opposition from arriving at a deal on changing the rules guiding the election of Constitutional Court judges.

“At the end of the day, the success or its lack thereof, in revisiting the rules governing the election of Constitutional Court judge candidates will be determined by the willingness to do the right thing. The willingness to have a quality and trustworthy Constitutional Court by improving the rules governing the election of judges,” said Kiska, who personally considers the current motion on the table to be insufficient, as cited by the TASR newswire.

Aside from other issues, Kiska objects to increasing the candidates’ minimum age from 40 to 45.

Kiska also pointed out that if the rules are not changed, then the current governing coalition and incumbent president will appoint two-thirds of the Constitutional Court judges.

“And if we don’t introduce continuous replacement of the judges, then the Parliament - which we will elect ten years from now - will vote on 12 out of 13 judges and, hence, acquire absolute control over the staffing of the Constitutional Court,” said Kiska.

On Thursday, September 20, Kiska met with representatives of the coalition parties. Following the talks, Deputy Speaker of Parliament Martin Glváč (Smer) unveiled the motion sponsored by Smer to have Constitutional Court judges elected directly by Parliament with 90 votes.

Currently, Parliament elects candidates for Constitutional Court judges and submits them to the president, who subsequently appoints them to the bench. Glváč refers to the statement by the Venice Commission as an argument to back the change. Justice Minister Gábor Gál (Most-Híd) has not commented on whether he would endorse such a proposal.