The crowd-puller has been prepared by NUMEN / FOR USE. 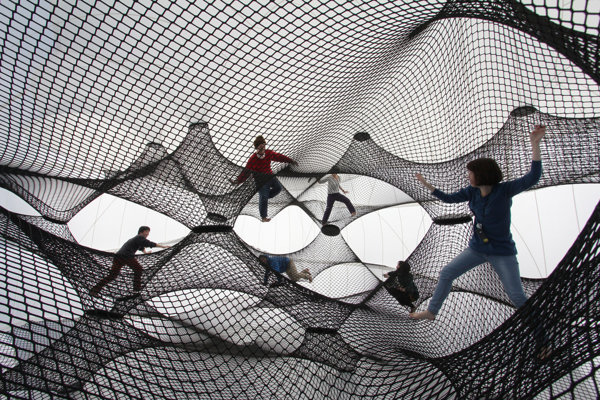 The crowd-puller of this year’s White Night in Bratislava will be a huge inflatable cloud. If you enter it you will find yourself in a fascinating space invented by the art group NUMEN/FOR USE. It was created by three industrial designers from Austria and Croatia: Sven Jonke, Christoph Katzler and Nikola Radeljković.

The multi-genre festival, White Night / Nuit Blanche will take place on September 29 in Bratislava. In its fourth year it presents 30 artworks to be discovered along two routes. It will also lead along the Danube embankment and will connect with the pedestrian route in the historical centre.

They have already presented the project in several cities but in Slovakia, it will be slightly different. “And it will have to be guarded constantly,” CHRISTOPH KATZLER said for SME. You can find it the whole weekend long under the castle near Zuckermandel (Friday to Sunday 10:00 till 22:00, Saturday until 2:00 in the morning)

Sme: Do you think about how people are influenced by the space they move in, and its shape?

NUMEN/FOR USE (NFU): Not too often. Our way of designing new spaces is a lot about accidents. Once, our group was tasked to make a stage design for a performance in Croatia. We enjoyed that a lot and then we started creating installations of various shapes from elastic and light materials which people can actually go inside and have fun and good experiences. 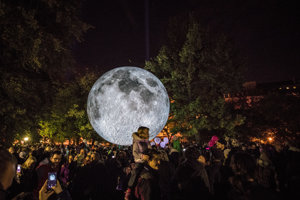 Sme: What is your method?

NFU: Our parameters are simple: we know we have to avoid hard materials. We don’t use any wood or metals, we gave up on them, otherwise we would have had to involve structural engineers to evaluate our works. They start calculating in which part of the installation ten people can sit at one time and in which part they can't. Thus, we prefer to work with air matresses, tapes and nets. It is less complex. We have one more advantage compared to architects in that we don’t have to consider the function of the space we design. 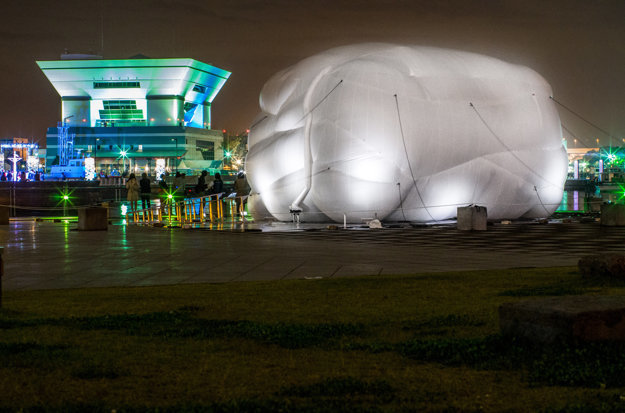 Sme: You are a Croatian-Austrian group, how did you get to know each other? NFU: Sven (Jonke) started to study industrial design in Croatia and in Vienna at the same time. He needed somewhere to stay, I had a free room to let and that’s how we met. In Croatia, Sven started to work with Nikola (Radeljković). Later on, we came together.

Sme: The Net Blow Up project has already been introduced in other cities, e.g. in Linz and Yokohama. How different will it be in Bratislava?

NFU: Many of our projects are site-specific so we have to react to the space. Obviously, the site-specific objects are artistic in a way, but not so free because we have to respect the space, and there are some serious logistic and structural considerations – this is more of a rational decision process. Working with a net, you have to think how you are going to hang it in each space so that it holds, and we focus a lot on structural stability.