Children are convincing their parents to stop smoking 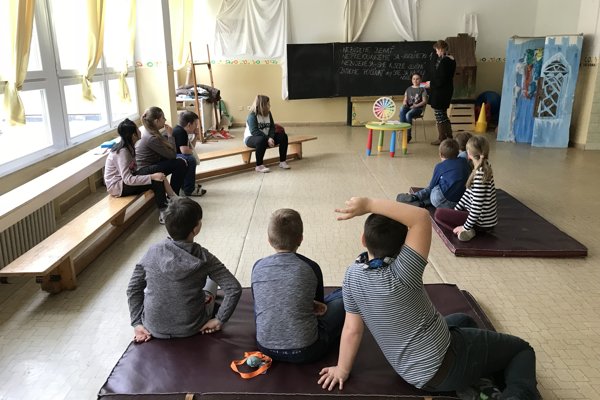 Young people growing up in families where one or both parents are addicts have a strong predisposition to become addicted themselves.

“Addicted parents and their partners often receive help, but children mostly go unnoticed,” says Jozef Brenkus, co-founder of Život bez závislostí – an organization based in Poprad which tries to give young people a better chance to live an addiction-free life even if they come from socially disadvantaged families.

The organization focuses on prevention among children from both functional and dysfunctional families. “Acting in line with the adage ‘an ounce of prevention is worth a pound of repression’, we mostly focus on prevention,” Brenkus explains.

He thinks that the period of puberty and adolescence is key because that is when people try to find and develop their own identity while also combatting doubts about themselves and their place in society. “That is why discussing the mental health of young people is necessary – especially with them,” says Brenkus.

As a preventive activity, Brenkus and his colleagues organize camps for children as well as an anti-drug multimedia performance, which was attended by as many as 4,000 elementary, middle, and high school students over the past two years. Every year, his colleagues and volunteers join forces to work with elementary school students. According to Brenkus, these children are perceptive enough already and they understand what things in life are beneficial. Moreover, they are not coping with the problems of puberty and adolescence yet.

“We use a cyclical education model, working with the same students over a period of three years. Our sessions include discussions about each person’s value or the fact that differences between people can be beneficial rather than being a source of animosity and ridicule. We also talk about tolerance, true friendships, relationship problems, various sources of danger, addictions, modern technology, the need to maintain healthy relationships, etc.” Brenkus explains.

Thanks to the organization’s work, children understand that there is no such thing as a perfect, problem-free family, which helps them come to terms with their own problems. This also makes it easier for children to understand that they are never responsible for their parents’ problems with alcohol, even though parents often blame their children so that they don’t have to admit to their own failures. It happens rather often that children announce with a smile on their face that they have successfully convinced one of their parents to stop smoking, for instance.

Another of the organization’s key activities consists of extra-curricular clubs organized in East Slovak Roma settlements, namely in Žehra, Bystrany, and Soľ. These were launched two years ago as a response to the increasing number of people in need of help. The project intends to create a space for private conversations and counseling to help people manage life situations in the long run.

“Eight years ago, for instance, we came to a rehabilitation center and met a young man who then decided not to return to the town where he had lived previously, but rather to stay with us so that he would have our help close at hand. He moved to Poprad, finished high school, and is currently studying social work because he wants to give back the help he has received. He has previously worked at our community center and our cooperation continues even now after he has left Poprad,” describes Brenkus.

Work with children helps the organization’s employees get closer to their parents and influence the families’ lives. This can lead to significantly better school results as well as the identification and development of the children’s talents.

“Our work with children has helped us understand that the most important thing you can do for them is love them and be a secure, trustworthy person with whom they can share the joys and sorrows of life. Everything else – knowledge, skills, and creative procedures – is just an extension,” Brenkus adds.

Život bez závislostí wants to continue working on its projects. If you think that drug prevention is an important topic that needs to be presented to children in a suitable form, you can support it via the DobraKrajina.sk portal.