V4 presidents: Nord Stream II is a threat to Europe

Presidents of the Visegrad Group countries discussed, among other things, the rise of xenophobia, extremism and nationalism in Europe. 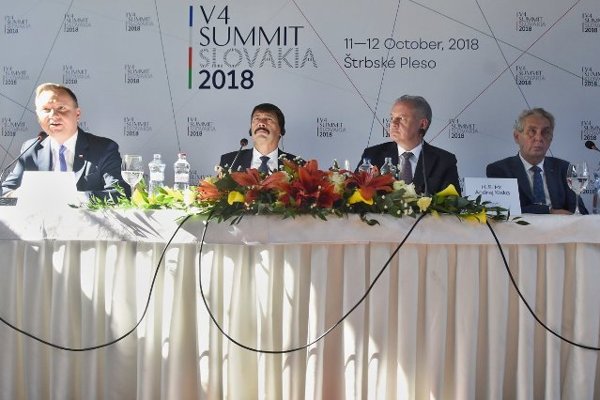 The building of the Nord Stream II gas-pipeline project is a threat to Europe, the presidents of the Visegrad Group (V4) countries agreed during a two-day summit held on October 11-12 at the Slovak resort of Štrbské Pleso.

“In the past, we have repeatedly discussed this issue,” Slovak President Andrej Kiska stressed, as quoted by the Sme daily. “Nord Stream II should not have been built in any case.”

He named three reasons for this, primarily “that the capacity of the existing gas pipelines is not fully used – some statistics demonstrating only 50 percent”. Thus, it makes no sense to build a new pipeline.

A tool for blackmailing Ukraine

As another reason, Kiska cited deepening dependence on Russia as another factor against this project and as a third, he pointed to the political connotations. By building this gas pipeline, Russia would gain a tool for blackmailing Ukraine, the Slovak president added.

“It is not just business but a political project which could disrupt the energy security of the EU and also divide the European community – this is where it is harmful, as it may potentially break up the European Union,” Polish President Andrzej Duda agreed, as quoted by Sme.

Future of the EU

The presidents concurred over several issues during the summit. One of them was that potential migrants should be helped in their countries of origin so that they do not have to leave their homes. They also pointed out that the outer borders of the European Union (EU) need to be strictly guarded and protected and that human smugglers need to be fought against, as reported by Sme.

Czech President Miloš Zeman labelled the elimination of mandatory refugee quotas as the biggest success, stressing the idea that the best solution is to aid the people of plagued countries in their homelands.

Kiska also addressed the rise of xenophobia, extremism and nationalism in Europe and suggested as the solution the more intense cooperation of politicians and citizens who should be the advocates of the project of peace and cooperation. The Slovak President emphasised the need to defend the EU project and pointed out that the task of the V4 countries is to unify the European Union.

He also appealed to the mutual empathy of individual member states.

“Any discussions on the division of Europe into old and new, or into two-speeds is not how we see the EU in the future,” Kiska added, as quoted by Sme, and positively evaluated the Frontex project of cooperation on the EU’s outer borders.