The Kremlin is seen behind the feminist video

Viral video from subway has a suspicious source. 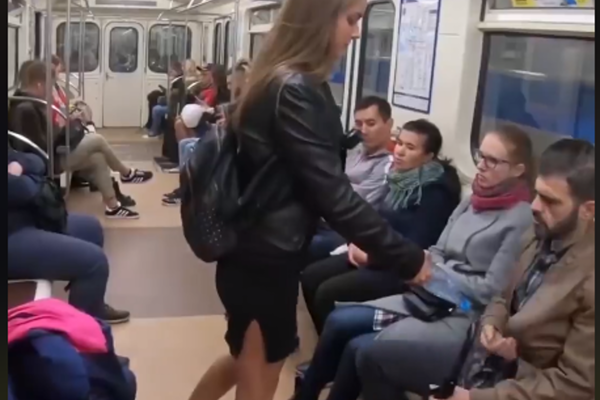 Has feminism exceeded the limit of common sense? This is also the way how you can read the video that Russia has launched. (Source: In The Now)
Font size:A-|A+0

A young woman is walking on a subway train and approaching men. She is spilling water mixed with bleach on those who are sitting with their legs wide open. However, the video is a set-up and the actors were paid.

The video, which has spread across the world and has millions of views, was created by In the Now - a channel in English controlled by Russia Today. The EU versus disinformation (euvdisinfo.eu) warned about this video in its analysis.

The viral video was supposed to present the decadence of western values, the flip side of feminism and trends coming to Russia that could jeopardize Christian traditions.

The scenes from the video were shot in the St. Petersburg metro, and the Russian woman speaker is known as "social activist" Anna Dovałuk. The video disseminated over social network sites invoked outrage, but there have been opinions that cast doubt on the authenticity of the images. The Bumaga Internet Magazine in Petersburg has interviewed one of the men who appeared in the video. He said he received the money to act as the victim of a feminist attack.

The Norwegian daily Afterposten also analysed the video, saying it was created as promotion for the Kremlin. They wrote that Ann Dovaluk promotes Russian patriotism, the army and the Orthodox Church. The case reached Russian parliament, where nationalists demanded feminists undergo psychiatric treatment, the manipulatori.cz reports.

Negative reports of feminism and the MeToo movement were spread through Russian state television in the past. Television broadcaster Dmitry Kiselev, on whom the European Union has imposed personal penalties, has compared MeToo discussions with Soviet repression.

He claimed that everything could only be misinterpreted as dirty harassment, ridiculed cases of sexual accusations in the West and called them "malign feminism" coming from the US to Europe and Russia.