Visual artist Luka Brase found success as an artist by washing dishes, sleeping on beaches and embracing his individuality overseas. 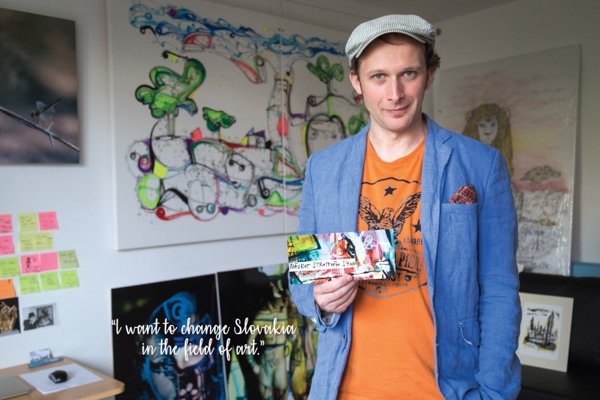 I also wanted to see something new, something beyond what we had here. In Ireland, I first started off as a dishwasher and then began working in security. This was at the time when many people from eastern Europe came to do simple jobs in the West.

“You came here to steal our jobs and take our money”

That’s what my supervisor would tell me. I hated him. I knew why I was there. It was to grow, learn and make an exhibition. This was my mission. He would just laugh and call me a liar. So I tried to explain it to him in a different way: “I am working here, but I am also paying taxes. So my money will actually pay for your pension, not mine.”

Read Also:Slovak migrant shares the stories of other migrants to understand her own Read more

I began travelling to the Netherlands and totally fell in love. But the Dutch labour market was not yet open to EU-8 nationals, so I started selling my work on the street just to get by. I was sleeping in the park, on a beach, in the central station, anywhere I could lay my head down.

Living abroad taught me that we are all just humans

It doesn’t matter where you are from, but what value you bring. Do you do good unto others, or do you cause harm? In my art, I work with these principles of humanity. I aspire to bring these values to Slovakia, because I see them as important.

In the West, they have no information about us

My first break came from a Dutch gallery. They were looking for something new. Their exhibitions were full of western artists. It was also a question of good timing; Slovakia had joined the EU and western Europeans were curious about the East.

I learned how to be an individual, but also how to take responsibility

Outside, you are a stranger. You know no one. You don’t speak the same language. You don’t share the same mentality. You are far away from your family and friends. It was there that I learned how to rely on myself.

Everybody brings back something closer to his or her personality

Many of my friends continue earning their living abroad, but they bring back to Slovakia new contacts and new ideas. Together, we work on collaborative projects and engage with international galleries.

This is one way we can change the country

When you go abroad, you automatically understand more, because you can better compare. It’s also about establishing new friendships. Today, I operate from a much wider context and network.

I did not want to leave Slovakia for good

A lot of us return because we want to help with change. I want to change Slovakia in the field of art.

I am home here